Only six days ago, the Indians were in Detroit with an opportunity to take the division lead. Now the season is effectively over. Six days is all it took for the Indians fall out of contention. There were some close losses at first, then injuries, and now it seems the whole thing has fallen apart.

Shin-Soo Choo became the second Indian in a week to injure himself in warmups after he strained something in his trunk area before the game. Asdrubal Cabrera sat as well, though this was planned ahead of time by Acta. So the lineup that faced Felix Hernandez more resembled a Columbus lineup than a Cleveland lineup. Just two runs were scored, which is about right given the quality of the pitcher and of the lineup.

But Josh Tomlin's performance was the shocker. For the first time in his career, he failed to finish five innings. He gave up 11 hits and 6 earned runs in 4.2 innings against what is on paper the league's worst offense. The way they hit the Indians this series, though, you'd swear they were one of the best offenses; the Mariners scored 29 runs in the four games in Cleveland, good for a 7.25 average. The offense has mostly been absent since the beginning of the season, but the pitching has held things together. The pitching couldn't hold this series, and the result wasn't pretty. Rafael Perez, one of the main stalwarts of the bullpen, gave up three runs in the seventh to put the game totally out of reach.

In off-the-field news, Carlos Pena, Jason Kubel, and Jim Thome have all been claimed on waivers today, according to Buster Olney. The White Sox would have had precedence over the Indians if both made claim to a player because Chicago had a worse record than the Indians at the beginning of the day. The team that made the claim has a 48 hour window in which to work out a trade with the player's club, or the player's club to simply choose to pull the player back off waivers. Kubel or Pena would be welcome additions to the lineup, but with the team effectively out of contention, they aren't necessary any more. But acquiring Thome would make sense regardless of the Indians' place in the standings. Thome is a lock for the Hall of Fame, and he's going to go in as an Indian. It would be nice before his career ends to play in a Cleveland uniform one last time. And, let's face it, it would be a great business move for the Indians. 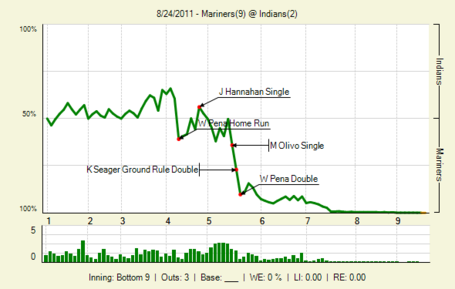