So after the high of the first game of the day, the pitching matchup for the nightcap at the very worst seemed neutral. Anthony Vasquez would be making his major-league debut for the Mariners, and although the left-hander had decent minor-league numbers, his stuff wasn't that good (a career 9.5 H/9 ratio in the minors backed that up). The Indians called up Zach McAllister to face him; the right-hander was making his second major-league start. A slugfest was expected, though not to the extent that actually occurred.

The Indians really needed McAllister to only get them to the fifth inning with them still in the game, but Zach couldn't even manage that. After two good innings to start the game, things started to unravel. The eighth and ninth hitters in the Seattle order reached to start the inning, and after Ichiro grounded into a fielder's choice, the middle of the order teed off in their second shot at McAllister. LGFT Franklin Gutierrez doubled, Dustin Ackley singled, and Mike Carp blasted a two-run homer deep into the first level in right field. It was now 5-1 Seattle.

After Shin-Soo Choo hit his second home run of the day in the bottom of the third, Seattle went back to work on McAllister. They scored five more runs in the fourth, all charged to the Indians starter. The final two runs of the inning came after McAllister had left; Wily Mo Pena line a ball to deep center, but Koskuke Fukudome got back to it time to catch it. He jumped to grab it, but the ball hit the heel of his glove and bounced out, allowing both runners on base to score.

Even with an 10-2 deficit, the Indians still had opportunities to get back into the game. They would score two in the fourth, another two in the sixth, and one more in the eighth. And they had several other opportunities to score more than that. They left the bases loaded in the sixth and eighth innings, both times with one out. In the eighth, with the Indians down 12-7, Carlos Santana was up in the count 2-0 with a run already walked in, but popped up to the infield. That defused what would the Indians' best chance to get back into the game.

Afterwards, Detroit won in Tampa, so the Indians lost a half-game on the day. They're now six games out, and any margin for error is gone. They'll have to play at least ten or twelve games above .500 the rest of the way even to have a chance, and given all the injuries they've sustained, that's a very tall order.

(The Indians optioned McAllister after the game, and recalled Cord Phelps from AAA) 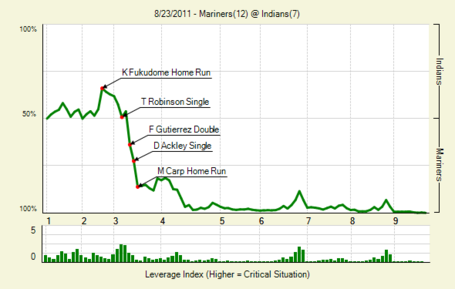