Two games is only 1/81 of a baseball season, but that's how quickly Cleveland's prospects went from "by golly, they can win this thing" to "it's going to take a Tigers collapse to win it," and that isn't even considering the White Sox, who are now tied with the Indians in second place.

It would be unfair to expect much from any lineup missing four starters, and the four players missing from the lineup (Sizemore, Kipnis, Hafner, Choo) were four of the best offensive players the Indians have. Hafner was placed on the Disabled List prior to tonight's game, and as there's a double-header today, Josh Judy, a reliever was called up instead of a hitter. Shin-Soo Choo was also out of the lineup because he was his wife, who was about to deliver the couple's third child. But they were facing the perfect team to play short-handed against, and had a real good chance of winning the game late.

Fausto Carmona gave up a leadoff home run to Ichiro, and really struggled to get through the first two innings. He gave up an unearned run in the second thanks to Lou Marson's throwing error, but got out of the inning without allowing more damage. He threw a lot of pitches early, but made it through six innings.

The Indians tied the game up in the second with some unearned runs of their own. After Brendan Ryan threw wide on what should have been the third out of the inning, Lou Marson and Ezequiel Carrera singled to plate two runs. Another error loaded the bases for Jason Donald, but he popped up to the end the inning.

The turning point of the game in my mind game in the fourth inning. Michael Brantley came to the plate with the bases loaded and one out, but grounded right back to starter Jason Vargas, who started a 1-2-3 double play to end the inning. The Indians wouldn't have any more scoring opportunities until the ninth.

The score remained tied until the ninth, and Chris Perez was summoned to set up a walk-off opportunity. But he hit Miguel Olivo to open the inning, then hit Brendan Ryan, who was trying to lay down a sacrifice bunt. The unforced errors didn't stop there, as Perez tried to nab Olivo at third on Trayvon Robinson's bunt, but he couldn't handle the ball, and the bases were loaded without a hit. Perez struck out Ichiro, but Franklin Gutierrez hit a ball just a bit farther than Matt LaPorta's ball on Sunday, and Miguel Olivo was able to score just ahead of the tag. Carrera's throw was on the money, but a fraction of a second late. 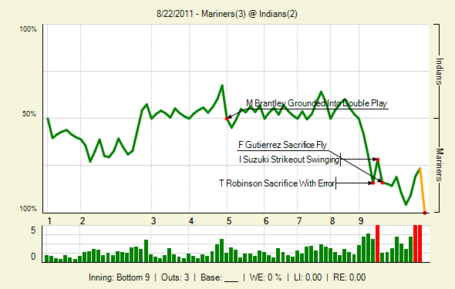