So with last weekend's sweep at the hands the Tigers, the season's over with, right? Not by a long shot. There's still six head-to-head games left with Detroit, including the last three games of the season, and the schedule is going to get a lot easier on paper over the next two weeks. And 11 of those 14 games will be at home.

The first step towards getting back into the race is an unconventional four-game home series against the Mariners.

So who will be that TBD on Tuesday? There's two possibilities: Jeanmar Gomez or Zach McAllister. Gomez last pitched on Wednesday, and McAllister pitched on Thursday, so either starter would be going on full rest. Gomez has been pitching better of late (3 earned runs or less in each of his last 10 starts), so I'd guess he'd get the call.

The Mariners come into Cleveland having lost five in a row. They played in Tampa over the weekend, and were swept by the Rays. They've really turned over their lineup since they last played the Indians, adding Casper Wells (Doug Fister) and Trayvon Robinson (Erik Bedard) via trades, and Dustin Ackley and Kyle Seager via the minors. Blake Beavan, who made his major-league debut in early July, will face the Indians for the first time on Tuesday.

Why all this turnover? For one, the Mariners have been the worst offensive club in the AL; they are last in the league in Runs, Hits, OPS, and Home Runs, 12th in walks, and have struck out the second-most times (the Indians, of course, are first). Ichiro is having his worst season (.267/.305/.317), and LGFT Franklin Gutierrez is hitting an incredible .212/.248/.261, testing the limits of how bad a great defender can hit while still holding down a starting job.

Felix Hernandez, Wednesday's starter, is having a down season, "only" posting 113 ERA+, though his strikeout and walk rates are in line with his career averages. Jason Vargas has struggled since the All-Star Break, allowing opposing hitters a .346/.409/.583 line.

Tickets for the Series 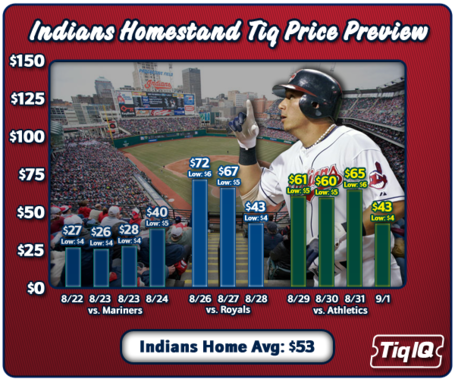 Let's Go Tribe is partnering with TiqIQ for the remainder of the season to provide a way for readers to easily search the secondary market (such as StubHub and eBay) for Indians home and away tickets. In addition, you'll be seeing customized graphs detailing ticket price information like the one above. The site aggregates information on ticket prices, and gives updated market pricing that allows you to make an informed decision (such as average price for that particular section, trends, etc). Please see here for a site tour. So if you're interested in attending any Indians game, whether home or away, check out the LGT Ticket Portal, as you'll not only save yourself time and money, but also help your resident LGT authors out as well.