The Indians fought their way through a very difficult schedule in early August, and actually gained on Detroit. Had they won just one game on the weekend, they would have been in a very good position: they would have been 2.5 games behind Detroit with an 11-game homestand against three of the weaker teams in the American League, while Detroit headed on a 7-game road trip to Tampa and Minnesota.

Even though they lost the first two games of the series, the Indians were sending Ubaldo Jiménez to the mound, and Justin Verlander, even though he'd be pitching on normal rest, was being held back a day. The matchup seemed favorable, and if Jiménez could repeat last performance against the Tigers, the Indians would come back down 2.5 games, and the bullpen would be in very good shape heading into a 8-game week.

Jiménez started well, facing the minimum through the first two innings. He came out for the third inning to face the bottom of the order, and walked LGFT Jhonny Peralta to open the inning. He then hung a curve in Wilson Betemit's hot zone, and the Detroit third baseman lined a double down the right field line. Two straight singles drove home the first two runs of the game. Jiménez got Brennan Boesch to line out to center for the first out of the inning.

The next at-bat, against Delmon Young, was probably the key at-bat of the game. Young was hitting in front of Miguel Cabrera, and when the count went full, it was a given that Young would get a strike. Ubaldo shot for the outside corner, missed on the middle of the plate, and Young socked the ball out of the park to give the Tigers a 5-0 lead. Because it was so early in the game, Jiménez stuck around to give up two more runs (on Victor Martinez's two-run shot), and pitch to twelve batters in the inning.

Down 7-0, it looked like a second straight blowout, but the Indians had a big inning of their own in the fourth. Carlos Santana hit a solo homer with one out, and after Kosuke Fukudome grounded out, six straight Indians reached based, the inning topped off by Michael Brantley's two-run double. Rick Porcello was pulled in the midst of the rally, and by the time the bottom of the fourth rolled around, it was 7-5, and presumably a battle of bullpens.

Ubaldo came out for the fourth, and should have pitched a scoreless frame, but a horrible call at second base cost the Indians a run. Austin Jackson led off the inning with a single, and then tried to steal second base. Lou Marson's throw was perfect, and Asdrubal Cabrera hardly had to move his glove, as Jackson's foot hit it before getting to the bag. But the second base umpire somehow didn't see the tag, and ruled Jackson safe. Instead of there being one out with the bases empty, there was a runner on second with one out. Delmon Young's one-out singled plated Jackson, and Jiménez was pulled from the game. Now it really was a battle of bullpens.

Joe Smith was great again today, going 2.2 innings in relief of Ubaldo. He got Miguel Cabrera to end the fourth by grounding into a double play, pitched a 1-2-3 fifth, and got out of a mini-jam in the sixth thanks to another blown call on the bases. With a runner on second and nobody out, Ramon Santiago laid down a very poor bunt; the ball was fielded almost immediately by Lou Marson, who for some reason looked towards first, then threw to third to try to get Betemit. The tag was late, but the third base umpire hesitated a second, then called Betemit out. Both runner and manager were irate, and Jim Leyland would be ejected. I supposed you could say the bad calls cancelled each other out, for if Betemit was called safe, Detroit would have had runners on first and third with nobody out. But neither call should have been missed.

Meanwhile, the Indians crawled back to within a run with single tallies in the fifth and sixth innings. The sixth inning run was costly, though, as Travis Hafner pulled up lame while heading to second for what should have been an easy RBI double. It looked at first like a hamstring injury, though the Indians later classified the injury as a "right foot injury." I'm never good at speculating at these types of injuries, but I'd be shocked if Hafner doesn't go on the Disabled List.

The Indians couldn't get that tying run across. They had a scoring opportunity in the eighth when they got runners on first and second with one out. But Lonnie Chisenhall (hitting in Hafner's spot), hit into a fielder's choice, and Carlos Santana struck out to end the inning.The chance in the ninth inning was even better. Jose Valverde put the first two runners on base (walked Fukudome, hit Donald), and after Jack Hannahan put down a sacrifice bunt, all Matt LaPorta really had to do was to hit the ball on the ground up the middle, or a decent distance into the outfield. LaPorta got the ball into the outfield, but it wasn't deep enough. Austin Jackson caught the fly in shallow right -center field, and made a perfect throw to the plate. Fukudome was tagged out several feet in front the plate, and the game was over.

There's still time left in the season to make up 4.5 games, especially with a 6 head-to-head matchups left. But this was a critical loss, and will leave the Indians with almost no margin for error as they embark on a busy home stretch schedule. This one feels a lot like the game in mid-August 2004 against the Twins, though in this instance the Indians are going home instead of on the road. 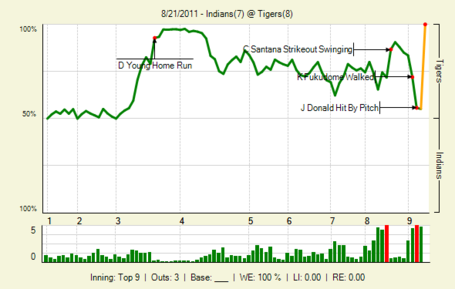