This one was over almost from the beginning. David Huff turned into a pumpkin, or, rather, the pitcher we once though he was. Everything was up, his fastball was slower, and he couldn't get ahead of hitters. And against the Detroit lineup, that meant runs early and often.

The Indians scored a run early but nothing after. Shin-Shoo Choo's home run in the third would be the only Cleveland run. The rest of the contest was an agonizing mix of bad pitching occasionally mixed with bad defense. Michael Brantley's drop in the fifth inning ended whatever chance the Indians had to getting back into the game, turning a 5-1 contest into a 7-1 game.

The Tigers can go 4.5 games up on the Indians with a win today. Thankfully Justin Verlander will not make the start, but the way the Indians are hitting, it will take a fantastic outing from Ubaldo Jimenez to prevent the sweep. 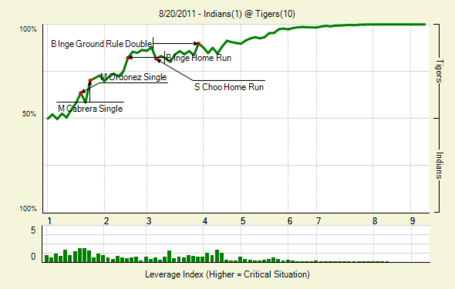