1. He's going to go at least five innings (he tied the major-league record tonight for consecutive starts of five innings or more to begin a career), but rarely goes farther than seven innings.

3. He's very efficient with his pitches.

5. ...A significant portion of those hits will leave the yard (coming into tonight's game one-seventh of his hits allowed have been home runs.)

So what happened tonight? Tomlin went 6.2 innings, threw 90-some pitches, didn't walk a batter, gave up just six hits, but three of them were home runs, and all three came in the third time through the order.

Max Scherzer was able to have success against the Indians despite throwing mainly fastballs and changeups and spotting them almost exclusively on the outer half of the strike zone. The Indians were only able to score one run off Scherzer, but that was more of a gift than anything. With two outs in the seventh and a runner on first, Lonnie Chisenhall took what looked to be strike three, but the pitch was ruled a ball. Chisenhall then hit a sharp grounder that Miguel Cabrera dived and caught, but he stumbled getting to his feet, and Lonnie reached, with Carlos Santana going to third. Santana would score on a Scherzer wild pitch. Scherzer got out of the inning, and the Indians wouldn't threaten again. 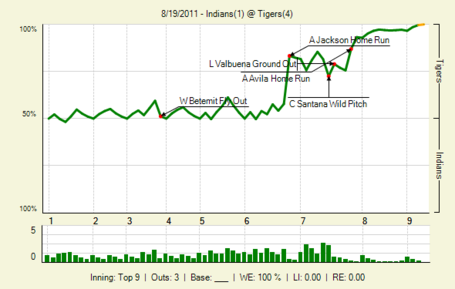