After losing the first game of the series, the pitching staff ensured the Indians left Chicago in better shape than when they arrived. Four runs a game at US Cellular Field is usually not enough to win, but they pulled it off thanks in large part to Carmona's 8.1 innings on Wednesday. For if the Indians had use Pestano or Smith in the second game of the series, they might not have been available to pitch in the finale, and that might have meant a different outcome to the game and the series.

The Indians received some bad news just before the game began. Jason Kipnis, who was in the starting lineup after missing several games with an oblique injury, was pulled at the last second because of an unrelated injury. He injured his hamstring while warming up before the game. He's been placed on the 15-day Disabled List, and that means the Indians will be without one of their major offensive weapons until at least the end of the month. Luis Valbuena will take Kipnis's place on the roster, and should share time at second base with Jason Donald.

Phillip Humber made his first career start against the Indians, but he had to leave the game very early. In the second inning, Kosuke Fukudome hit a line drive that struck Humber just above his right eye. It was a direct hit, knocking Humber off his feet, but fortunately he was not seriously injured. He got up immediately, but taken out of the game for precautionary reasons. So the Chicago bullpen, which had been used extensively in the series, would have to pitch the balance of the game.

The White Sox got on the board first when Paul Konerko hit a solo home run in the third inning. Masterson left a ball up and out over the plate to Konerko, who didn't miss the mistake. The Indians would respond almost immediately, as Matt LaPorta hit a home run of his own in the top of the fourth, though Matt's came with a runner on base. The White Sox tied the game in the bottom of the inning with a two-out RBI single by Tyler Flowers.

The Indians took the lead for good in the sixth when Shin-Soo Choo led off the inning with an infield single off left-hander Will Ohman, and Fukudome pulled a triple down the right field line. Ohman would then load the bases by walking Jack Hannahan and hitting Michael Brantley. Jason Frasor was summoned; he struck out Donald, but walked Asdrubal Cabrera to force home a run.

Masterson pitched the bottom of the sixth, and gave way to the bullpen. Rafael Perez and Joe Smith combined to retired the White Sox in order in the seventh, but Vinnie Pestano ran into serious trouble in the eighth. He gave up a rare hit to Adam Dunn, then after retiring the next two hitters, gave up a single to LGFT Omar Vizquel and walked Flowers to load the bases. He got out of the jam by striking out Gordon Beckham. Chris Perez pitched a 1-2-3 ninth to preserve the victory.

Detroit was off, so the win got the Indians a half-game closer to the division leaders. The Indians head to Detroit 1.5 games out of first place. Considering they were 2.5 games out when they started the Boston-Texas road trip, gaining a game despite playing all three first-place teams (two on the road) to start the month of August has been quite a feat. Now they have the opportunity to make it pay off with a good series in Detroit. 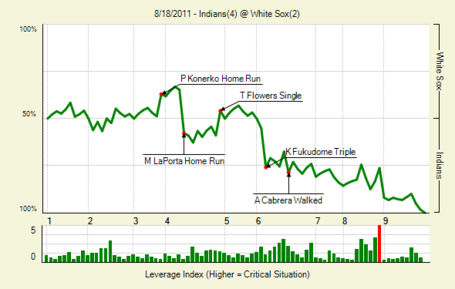