A night after depleting his entire bullpen and using a member of his starting rotation in relief, Manny Acta badly needed his starter to go deep into the game. The only catch was that his starter was Fausto Carmona, the veteran pitcher that's been bad more often than he's been good this season. Carmona Disregarded the anxiety surrounding his start among the Tribe faithful and pitched better than he has all year, notching a new season high for outing length with his 8.1 IP, and, with his 15 groundouts, coming up just one short of matching his season high in that category. The only run Fausto surrendered all evening was on a homerun by Alexei Ramirez to lead off the second. Following the jack, Fausto sat down 15 of the next 17 White Sox he faced and never looked anything less than awesome. The power sinker, sitting in the mid-90s with the bottom coming out, was in full effect and generating groundballs and swinging strikes.

Carmona out-pitched the White Sox own veteran stopper, Mark Buehrle, who scattered 12 hits over his 7.1 innings of work. The Indians put men on in seemingly every inning. The Tribe used a Fukudome single to grab a 2-1 lead in the sixth and then managed to cash in two more baserunners in the seventh on a Shin-Soo Choo single and an Asdrubal Cabrera sacrifice fly. Those two runs moved the tally to its final resting place of 4-1. With those two insurance runs in place, Acta didn't appear to hesitate to stick with Carmona in the late innings.  Fausto got a big double play to end the seventh and then sat the White Sox down in order in the eighth, preserving the Indians army of setup arms. When Carlos Quentin walked with one out in the ninth, Acta finally went to his bullpen—Chris Perez got a quick out, walked Adam Dunn, and then retired Gordon Beckham to end the game. The win pulled the Indians to only two back of the Detroit Tigers, who lost in the ninth inning to Minnesota tonight.

The Indians got offensive contributions up and down the lineup, but of particular note was Carlos Santana. Santana collected another two hits and is now OPSing 878 for August. He's emerged as the centerpiece of the lineup that many expected to see in April.

With the great start by Carmona, the Indians can now go into Thursday attempting to win the series with their ace, Justin Masterson, on the mound. The positive result tonight may also help fans forget (or fail to notice) that Drew Pomeranz had the best outing of his professional career tonight, as he debuted in the Colorado farm system. Pomeranz showed a newfound efficiency and somehow managed seven scoreless innings on only 78 pitches. 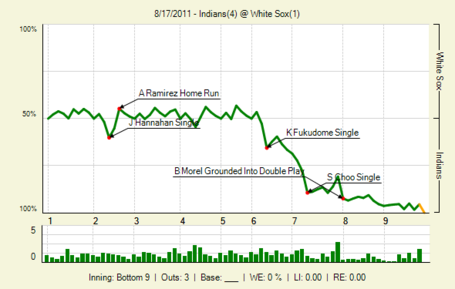