On the one hand, the Indians shouldn't have even been in this game, with Ubaldo Jimenez not even going five innings and with White Sox constantly on the bases all night long. But on the other hand, the umpiring was just so, so horrible and the game went so many innings that this loss makes me feel like punching something.

Where to start with this mess? I guess the best place is the beginning. Ubaldo in many ways gave a repeat performance of his Indians debut. He couldn't find the plate, threw a bunch of pitches (with an assist to shoddy defense), and gave up less runs than he should have, which kept the Indians in the game. He was pulled in the fifth, and so the Indians bullpen would have to go most of the rest of the way.

But the Indians managed to keep pace with the White Sox, even though they had far FEWER opportunities to score. And one thanks to a completely inexplicable blown call. After Gavin Floyd struck out seven of the first nine Indians he faced, he drilled Michael Brantley on the foot to begin the fourth inning. Shin-Soo Choo then pulled a ball down the left field line, which would normally be a double. But Brantley ran into Alexei Ramirez rounding second and fell down, and although he would make to third, Choo had to remain at first. Manny Acta came out to argue that Choo should be awarded second due to the base line interference, but for whatever reason (none of the four umpires saw Brantley collide with Ramirez, none saw Choo slam on the brakes after seeing the collision, general incompetence, etc) the umpires did not send Choo to second. The Indians would score a run in the inning with a sacrifice fly, but thanks to a double play, the inning was over quickly. We won't know what would have happened had Choo been awarded second, but at the very least Floyd would have had to throw more pitches and face one more batter.

Juan Pierre of all people homered the next inning to give Chicago a 3-1 lead, but the Indians would tally a run of their own in the next inning to get the deficit back down to one. The teams would continue to score runs over the next couple innings, so that the game was tied going into the bottom of the sixth. Brent Morel led off the inning with a double, and after he was sacrificed to third, Alejandro De Aza chopped a ball over the drawn-in Carlos Santana's head and down the left line (according to first base umpire Wally Bell). Morel scored, and De Aza was ruled safe at third for his second triple of the evening. De Aza would score on Paul Konerko's single to give Chicago a 7-5 lead. I think De Aza should have been out at third, but then again, what do I know?

I do know that Laz Diaz is a terrible home plate umpire, and has been for a long time. He took things to a higher level this evening though, making at least 8-10 completely inexplicable ball/strike calls. And I'm probably underestimating, because after a while all that awfulness tends to blend together.

Anyway, the Indians came back to tie the game late, and the contest went into extra innings. In the 10th inning, Wally Bell blew a call at first, and Tony Sipp, after being removed from the game, was tossed after arguing the call. Chris Perez got out of the inning, and would start the 11th as well. He gave up a leadoff triple to Alex Rios (the fifth Chicago triple of the game), but got out of the inning thanks to Brent Lillabridge's blunder. With runners on first and third, Tyler Flowers hit a line drive right at Jack Hannahan. Hannahan first checked third base, then saw that Lillabridge was already two-thirds of the way to second. He then threw to first to easily turn the double play.

Chad Durbin entered the game in the 12th, and did rather well, until he ran into trouble in his third inning of work. Gordon Beckham doubled with one out, and he went to third on an infield single. David Huff, who started Sunday's non-game, was brought in to try to get out of the jam, but Juan Pierre ended this crazy, excruciating game with a single. 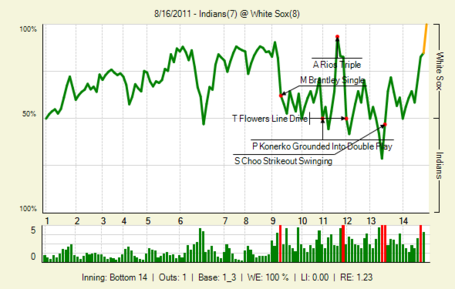