Not a lot of surprises in tonight's game, and in particular, no surprises of the exceptionally unpleasant kind.

The preternaturally steady Josh Tomlin shut down a meek Twins lineup for six innings, allowing just three batters to reach first base and not a single runner to reach second base. Tomlin started to lose it in the 7th, as expected, allowing a leadoff double to Justin Morneau, unsurprisingly. Jim Thome, the active major league leader in walks, drew a walk; it was the only walk allowed by Tomlin, who averages about one walk allowed per start. An RBI single from Delmon Young ended Tomlin's night with about the line you might have predicted: 6.1 IP, 2 K, 1 BB, 1 ER.

The Indians amassed 10 hits but stranded all of them, save for a beautiful home run shot by Asdrubal Cabrera (yawn, see photo) in the third. Joe Smith, Rafael Perez, Tony Sipp and Chris Perez all dominated the Twins to finish the game for Tomlin. Thome, the active major league leader in strikeouts, struck out to end it. Perhaps the only odd thing about this game was that LaPorta and Fukudome each collected two hits.

Four of the club's best lefty bats — Hafner, Kipnis, Brantley and Chisenhall — were on the bench tonight for the start against Brian Duensing — who pitched, you know, okay, like usual — so manager Manny Acta basically got away with sneaking in a key rest day for half of his best players. Jason Donald made the most of his opportunity, gritting his way to second base in the first inning and tripling in the 7th — stranded both times. Donald also singled Choo to second to set up Cabrera's three-run homer.

Totally unexpectedly, the Orioles jumped out to 5–0 lead over the Tigers. As expected, the Orioles blew it, and the Tigers notched yet another one-run victory — their tenth in four weeks — to maintain a three-game lead over the Indians. The Twins now have the second-worst run differential in the AL, after the Orioles of course. 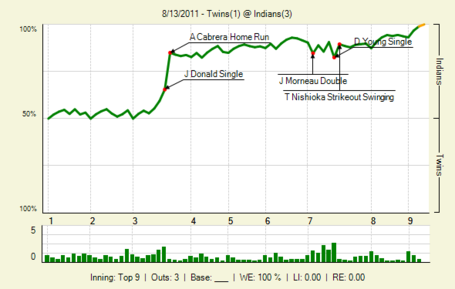