Just to make the argument: The Indians are every bit as good as the Tigers. Since the All-Star break, the clubs have the same run differential, –5, but coming into tonight's action, the Tigers were 13–12 while the Indians 11–15. Detroit was 8–3 in one-run games, while Cleveland was 3–6 in one-run games. In that difference lies the entirety of Detroit's slim lead over the Indians — and tonight, that key difference almost grew a bit larger. As of 9:15 p.m., the Indians were poised to lose yet another maddening one-run game hosting the Twins, while the Tigers were poised to win another one in Baltimore.

Justin Masterson likely will not compete for Cy Young votes, but nearly every advanced metric shows that he's one of the league's best five pitchers this season. He's not doing it with BIP luck (.295), which somewhat benefitted our "surprise ace" groundballers Westbrook in 2004 (.272) and Carmona in 2007 (.280), but rather with a league-leading groundball rate combined with solid numbers across the board.

Masterson gave the Indians another gem tonight, allowing only three baserunners — all singles, one of them an infield single — through seven innings. Those two solid hits, however, both came in the third inning and produced the Twins' first run. In that same inning, Carlos Santana air-mailed a throw to second on a stolen base, but that play proved to be fairly inconsequential, and Santana redeemed himself by throwing out two consecutive baserunners just minutes later. In four different innings, Masterson faced only three batters and induced two of them to ground out.

Despite a series of defensive miscues by rookie shortstop Tsuyoshi Nishioka, the Indians failed to put together any kind of a threat against LGFT Carl Pavano until the 6th, when the lineup seemed to flirt with Twins-style, slappy, flukey baseball. Ezequiel Carrera reached base on two infield singles, and he led off the 6th with a bunt single. Returning to the lineup after seven weeks on the Disabled List, Shin-Soo Choo hit the ball pretty hard in three at-bats but somehow reached base only on an infield single, pushing EZ to second base. The Indians eked out a run in that inning, but a pair of fielder's choices limited the damage.

Masterson yielded three more baserunners and a second run with one out in the 8th before being lifted for Rafael Perez, who closed out the inning. With the score 2–1 and lineup looking rather ineffectual against Pavano, that old sinking feeling was setting in again. This time, however, the Indians came through with a couple of solid pieces of hitting from Hafner, who battled through a tough at-bat to shove a hard grounder through the Twins' non-shift on the left side, and then Santana, who smoked a huge gapper to right-center to drive in the tying run. Matt LaPorta followed with a flare that fell in just a few feet in front of the full-sprinting LF Ben Revere — evidently playing at "no-doubles" depth, which ironically turned a shallow flyout into a double — driving in Santana for the go-ahead run.

Chris Perez notched a quick save to secure the 3–2 victory. The Tigers held on to their one-run lead in Baltimore and are now 9–3 in one run games since the break, while the Indians are now 4–6 in one-run games and still three games behind. Having said that, we won a very lose-able game tonight, while for the second night in a row, the Tigers barely won a game that they should have won easily. 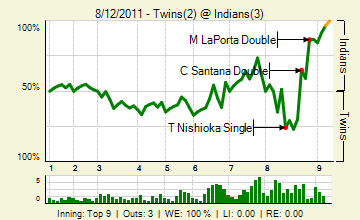