After Asdrubal Cabrera's two-run double in the third inning, the Indians were on the cusp of tying the game. But the Indians never mounted that cusp, and the ended with it still in front of them.

Justin Verlander was on the mound, so runs were going to be at a premium, and the Indians took this to heart. When Lonnie Chisenhall threw high to first in the first inning, first base Carlos Santana did not leap to catch the ball, but allowed it to go into the camera bay, alloing Austin Jackson to go to second base. The play would have been an error even if Santana catches the ball, but because he didn't, Jackson would score an early run, and as it turned out, was the difference in the game. After the inning, Asdrubal Cabrera verbally chewed out Santana in the dugout, and their teammates had to separate them. The mental mistake (not placing a premium on keeping the ball in front of him) was the impetus for the confrontation, and it was good that his teammate was the one delivering the message rather than the coaching staff, not only because Cabrera recognized the problem or took the initiative to correct it immediately. That particular play may not happen for the rest of the season, but there will be hundreds of small decisions just like the one that Santana made that could mean the difference between a one-run loss and walk-off victory in extra innings. It's the coaching staff's job to make sure these plays get made, but the job is a whole lot easier when peer pressure (especially coming the best position player on the club) is added to authoritative instruction.

Carmona would give up three runs in the second, though he wasn't hit all that hard. Peralta singled with one out on a broken-bat blooper, and the three run-scoring hits were all infield or ground-ball singles. The Tigers got their third run of the inning on a safety squeeze executed well by Austin Jackson.

Carlos Santana made up on offense for what he gave up on defense in the bottom of the second. He took Verlander deep to put the Indians on the board. In the next inning, Asdrubal Cabrera got the Indians to within a run when he doubled down the left field line. Magglio Ordonez couldn't get over to cut the ball off, and that allowed Jason Kipnis to scored from first.

That's the way the score remained. Carmona settled down after the second inning, and would go seven innings, allowing seven hits and two walks, and no runs from the third inning onward. But Verlander would match the scoreless frames as he went seven as well, striking out ten and allowing three hits and three walks. It seemed at times as if Verlander didn't really have his command, but he still made a quality start despite making a couple mistakes. He almost gave up the lead in the sixth, when Santana connected on a ball low in the strike zone and drove it to straightaway center. But Austin Jackson made an outstanding leaping grab, and may have taken a two-run homer away. That was the first of 11 straight batters retired by Verlander and the Detroit bullpen. 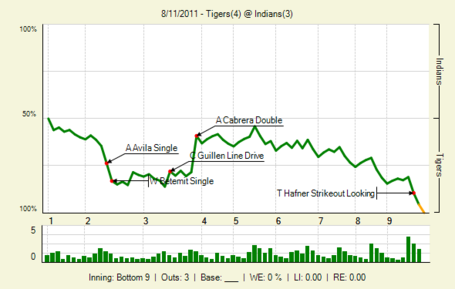