Ubaldo Jimenez, in his second start, gave the Indians everything they were hoping for, and a bit more. With the entire bullpen pitching last night, Jimenez needed to go deep into the game, and he came through, going eight full innings, and giving up three "earned" runs.

Jimenez started hot, striking out four batters in the first two innings, showcasing his tremendous four-seam fastball. He ran into trouble in the third when the Tigers got their first two batters on base, but proceeded to get the next three outs with ease, ending the inning on an infield pop fly. His one blemish in the game was in the fourth inning. After retiring Magglio Ordonez and Miguel Cabrera, Victor Martinez hit a ground ball deep into the hole between short and third, which normally would have been an automatic infield hit. But this is Victor we're talking out, and he was hobbled with a knee injury. Asdrubal Cabrera fielded the ball, threw to first, but Carlos Santana misjudged the ball and stepped the wrong way; the play was judged a hit, but it should have been an error on Santana. Ryan Raburn then hit a double high off the center field wall, and later Wilson Betemit doubled to drive in two more runs.

But the Indians, who had led 4-0 going into the inning, came right back in the bottom of the fourth. Rick Porcello, who had owned the Indians in his young career, didn't have it, and the Indians made him pay. Lou Marson led off the inning with a double down the right field line, and he went to third on Ezequiel Carrera's grounder to the right side of the infield. Jason Kipnis, who already had two hits (including a home run) under his belt, singled to center, driving Marson home. Kipnis next went first-to-third on Asdrubal Cabrera's single, and went home when the throw to third went into the photo bay. A wild pitch would plate Cabrera, and just like that, the Indians had built back their four-run lead. Porcello wouldn't last the inning, and he would be removed after Carlos Santana's double. Kosuke Fukudome drove home the fifth run of the inning with a double of his own.

So the rout was on. Ubaldo Jimenez settled down, allowing just one base runner the rest of the way. He cruised through the eighth inning, and allowed the Indians to give the back end of the bullpen a needed day off.

Jason Kipnis would get two more hits, and became the first Cleveland rookie since 1970 (Jack Heideman) to go 5-for-5.

The Indians now get to face Justin Verlander with house money in hand. They'll at worst end the series three games back, and if they pull off the victory, will be just one down. With three true rookies in the lineup, with two of their best offensive weapons on the shelf, they're still in the race, and of late they're starting to hit. Fasten your seatbelts. 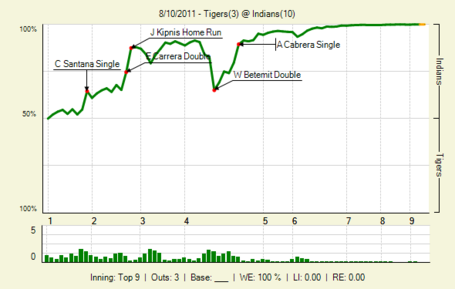