If anyone is still up, HUGE effing win tonight. That is all

That pretty much sums it up. This was a critical game for both the Indians and Tigers, but especially for the Indians. Justin Masterson was going for the Tribe, and with Justin Verlander going on Thursday, falling 5 games back (and into a second place tie with Chicago) with Verlander looming later in the series would be a huge blow to Cleveland's playoff hopes.The rain delay, and the subsequent use of the entire bullpen added more urgency to the mix. It was as close to an "all-in" game as you can get in August.

And with those stakes laid out, what the bullpen did last tonight/today was incredible. They HAD to throw 12 shutout innings, not only to win that particular game, but to keep the Indians in the division race. All seven members of the bullpen pitched, with Chad Durbin(!) and Frank Herrmann throwing five shutout innings between them. There were a couple jams (with the sixth inning being the toughest), but considering the offense they were facing, allowing 6 hits and three walks in 12 innings is as close to perfect as you can get.

(oh, by the way, Jeff Kellogg's strike zone was the worst I've seen in a long time, and contributed in part to the amazing scoreless stretch. Kellogg had players who normally never say anything visibly ticked off. I could only imagine what would have happened had Tony La Russa been managing one of these teams.)

The Indians tried to take the lead in the eighth inning. Jason Donald doubled high off the wall in left-center, and went to third on Ezequiel Carrera's grounder to the right side of the infield. Manny Acta then put on the suicide squeeze with Michael Brantley at the plate, but Daniel Schlereth threw an unhittable curve, and Donald was a dead duck at home.

After Frank Herrmann finished his second inning of work, starter Josh Tomlin started to get loose in the bullpen. Tomlin had started Sunday in Texas, and presumably this was his day to throw. Fortunately he didn't have to be used, as the Indians finally scratched out a run in the fourteenth. With one out, Asdrubal Cabrera walked, and went to third after Travis Hafner hit a rocket past the stationary Carlos Guillen. The Tigers elected to walk Carlos Santana to set up a force at any base, bringing up Kosuke Fukudome, who had obtained the Golden Sombrero already in the game. But thanks to a pitch to his elbow, he'd end up the hero. It was an appropriate end to an eccentric game. 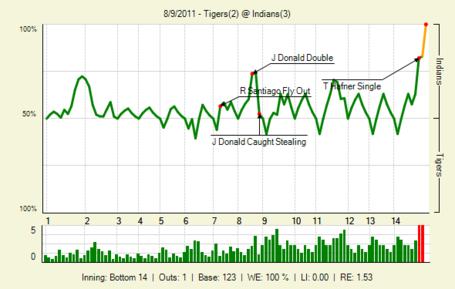