The ongoing theme for these recent games have been decent to very good pitching performances, but poor offense. So any wins have been coming by the come-from-behind route, or a pitcher's duel. If the Indians give up more than three or four, they usually lose. Tonight, though, the Indians won a shootout, scoring nine runs in the process. Five of those runs came off the struggling John Lackey, but they also struck for four runs off the Boston bullpen, including three off of Daniel Bard.

Josh Tomlin got through his usual six innings, but was hit very hard. He didn't walk a batter, but allowed 10 hits, including two home runs. He would have given up more than five runs if not for two fine defensive plays. In the second inning, Tomlin knocked down a liner hit back to him, and then started a rundown with the runner on the third, and actually tagged Josh Reddick out after Lonnie Chisenhall missed him. In the third, Kevin Youkilis tripled, and after a poor relay back to the infield, attempted to go home, but Tomlin retrieved the ball and made a perfect throw to the plate to nab the Boston third baseman.

The Indians took a 5-3 lead in the sixth thanks to two homers, another rare occurrence. After Jason Kipnis doubled, Asdrubal Cabrera homered down the right field line, and Travis Hafner followed with a solo shot to the Boston bullpen. But in the bottom of the inning, Jarrod Saltalamacchia hit a two-run homer off Tomlin despite breaking his bat in the process. So the game became a battle of bullpens.

Daniel Bard came into the game in the eighth inning having not surrendered a run since May 23, coincidentally against the Indians. Of the 11 runs he'd given up this season, 6 of them have been scored by Cleveland. And before the inning was over, the Indians would add to that total. Jason Kipnis opened the inning with a single, and Asdrubal Cabrera hit a line drive that just cleared the fence (and off an unfortunate fan's knee) down the right field line for a two-run homer, his second of the night, though originally ruled a single. Matt LaPorta would double later in the inning off of Randy Williams to cap a key three-run inning. Jason Kipnis added another insurance run in the ninth with a home run. 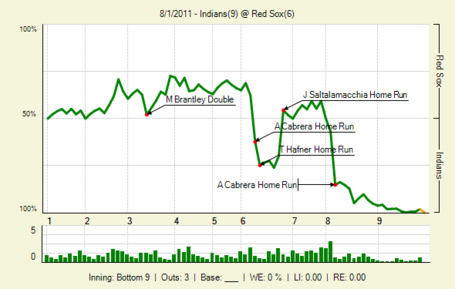