NOTE: I posted a recap sometime around 9:00 p.m. last night, and evidently the system rejected it, or ate it, or something. Rather than attempt to re-create it, I'm just going to plagiarize the very astute recap of some other guy named Jay, from the comment thread below. "Our best stories are in the comments," or something like that. Take it away, TribeJay ...

So this is what the Angels had to have happen to take the series from the Tribe:

And this is with two of the best starting pitchers in the league starting for them in the series. You know what, if that’s what it takes, then I’m okay with losing the series. I’m fired up. This is our Cleveland Indians. Let’s Go Tribe.

To all of you who hate the Twins, you should hate the Angels more.

For those of you who still want LaPorta hitting sixth, if you’ve watched the games on this road trip, you should understand why Orlando Cabrera is hitting there now. He may be due to hit into a key double play at some point, but for now you have to appreciate how often he does what it takes to deliver that key run.

I’m high on LaPorta, mainly because of the special way the ball jumps off the barrel of the bat. But until he gets, receives, or is bequeathed a clue, he needs to stay at the bottom third of the order. Ideally, he’ll figure enough things out so he can eventually hit sixth later this year, but I want him where he is for the moment. 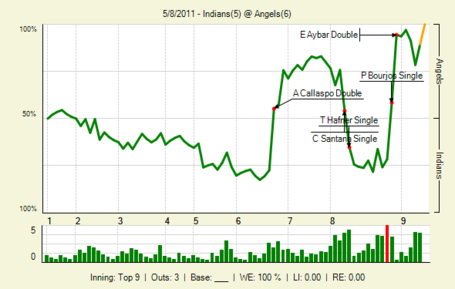