This matchup seemed a tall order to overcome. Alex White, a young pitcher with impressive but unrefined stuff, was going up against Jered Weaver, a pitcher with unimpressive but very refined stuff. Weaver hadn't given up more than three runs in a start this season, and he had dominated the Indians in recent matchups.

The Angels drew first blood from an unlikely source. White sped up Vernon Wells' bat with a poorly-located slider; the struggling Angels outfielder hooked the hanger over the left field wall to give LA a 2-0 lead, a lead that looked difficult to overcome given who was pitching.

The Indians finally got to Jered Weaver with an impressive series of at-bats in the fifth inning. With two outs, Grady Sizemore worked a walk, and Asdrubal Cabrera did the same. Both walks were well-earned, and added to Weaver's mounting pitch count. But the walks would have only been good for pushing Weaver out the game earlier if the Indians didn't capitalize on the opportunity. Shin-Soo Choo broke out an 0-for-the-road-trip slump with a line drive double down the right field line, scoring both Sizemore and Cabrera and giving the Indians the lead. Carlos Santana added to the lead with run-scoring single.

Now the Indians need to make the two-run lead stand up. White, while limiting the Angels to that two-run homer, had had to pitch out of several difficult jams. In the sixth, he had to get out another one, as the Angels placed runners on first and third with one out. A Vernon Wells sacrifice fly cut the lead in half, and White, facing what was probably his last batter of the game, struck out Jeff Mathis with a 96 mph fastball to finally end the threat.

The Indians had to use their best relievers yet again, but the tired relief corps was up to the task. Tony Sipp, Vinnie Pestano, and Chris Perez each pitched a scoreless inning, allowing just one hit in total, clinching Alex White's first major-league win. Vinnie Pestano allowed the only hit, but that was erased on an unconventional double play; LGFT Maicer Izturis tried going from first to third on a ground out to third, but Carlos Santana made an accurate throw back to Jack Hannahan, who tagged Izturis as he ran towards third.

The Indians have now guaranteed at least a .500 record on the West Coast road trip, quite an accomplishment considering the pitchers they've had to beat. 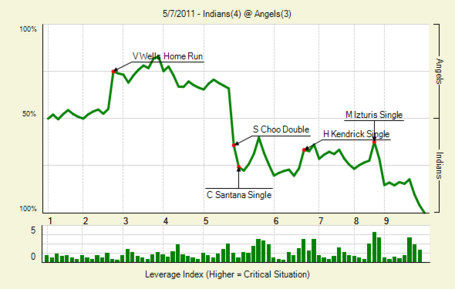