The Indians used practically their entire bullpen on Thursday, and came away with a 12-inning victory. So when the Indians and Angels went into extra innings, the bullpen options were very limited. Manny Acta had to go with Justin Germano, who hadn't thrown in over a week, to pitch the eleventh inning. It's difficult to keep a long man fresh, as they are always needed to be ready to throw multiple innings in case of an emergency or a blowout. If none of those things happen, then he can sit for a week.

The Indians offense collected just three hits in eleven innings, and only two off Angels starter Tyler Chatwood. They did draw five walks, but only managed one run on a sixth inning Travis Hafner groundout. Shin-Soo Choo opened the eighth inning with a line drive that seemed destined for the left wall, but left fielder Alexi Amarista made a fantastic leaping grab on the ball. Had the ball gotten over his head, the Indians might have taken the lead and came away with another close victory.

The loss was the first one that came when Justin Masterson started. Justin went seven innings, striking out 5 and walking none; that's a pitching line that's becoming routine for Masterson, and quite a departure from his early days of starting. He's cut his BB/9 almost a full walk lower and his H/9 2.5 hits lower from last year's rates. He's not only made the transition from reliever to starter, but has so far been one of the best starters in the league. 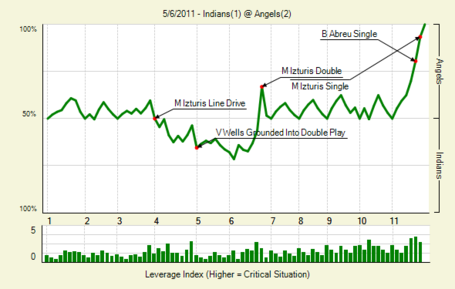