This may have been Jeanmar Gomez's last start for a while regardless of how he pitched, but it was good to see him have some success. Carlos Carrasco will be making a rehab start in Akron on Friday, and if all goes well, will come off the Disabled List next Thursday, with Gomez going back to Columbus. Jeanmar only pitched 5.1 innings, but allowed just one run, and that run should have been unearned. Manny Acta didn't press his luck with Gomez, as the bullpen was rested, and pulled the right-hander in the sixth inning with the Indians leading 2-1.

The Tribe offense is starting a tough stretch of games; they'll be facing some of the best starting pitching in the league over the next 10 days, including Jered Weaver, Dan Haren, David Price, Felix Hernandez, and Michael Pineda. They faced another tough pitcher today in Brett Anderson; the Oakland left-hander went nine innings, allowing two runs, both coming off an Asdrubal single in the sixth. The Indians had a golden opportunity to take the lead in the eighth, as Lou Marson reached third base with nobody out after David DeJesus dropped his fly ball. But Michael Brantley hit an infield squibber, and Asdrubal Cabrera and Shin-Soo Choo struck out.

That missed opportunity to add an insurance run was key, as Oakland would score off Vinnie Pestano in the next half-inning. Pestano couldn't find the strike zone, walking Conor Jackson and Josh Willingham with one out. Ryan Sweeney, who had a career day, doubled home Jackson. The Oakland crowd booed third-base coach Mike Gallego when he held Willingham at third, but with one out and Choo throwing home, it was the right call to make. The runner should have gone home on Kurt Suzuki's fly out, as Austin Kearns went to one knee while catching it, but didn't, so the score remain tied, and the two teams went to extra innings.

The Indians, having gone to their bullpen early, were down to Chad Durbin, Justin Germano, and Chris Perez as the tenth started, so it appeared that the longer the game, the less likely they'd come out on top. But Durbin pitched pretty well; he got out of a jam in the tenth that wasn't really of his making (Choo played a catchable fly ball into a single with two outs), and pitched scoreless eleventh. It would be Oakland's more rested bullpen that would falter first. Orlando Cabrera started things off in the twelfth by singling with one out off of LGFT Craig Breslow. Austin Kearns then walked. Acta started both runners while Jack Hannahan was at the plate, and Hannahan hit a bloop single into shallow left field. The ball was just out of the reach of the shortstop; if Pennington catches the ball, the inning would have been over. Lou Marson added another run with a single.

Chris Perez pitched the bottom of the inning, and really struggled to throw strikes. He walked Daric Barton, allowed a Conor Jackson single, setting up Ryan Sweeney's RBI single (his fifth hit of the day). With runners on first and third, though, he got pinch-hitter Hideki Matsui to pop up to end the game. It wasn't a pretty ending to the game, but all the same it clinch the Indians' first series win in Oakland since the days of Terry Mulholland and Ryan Drese. 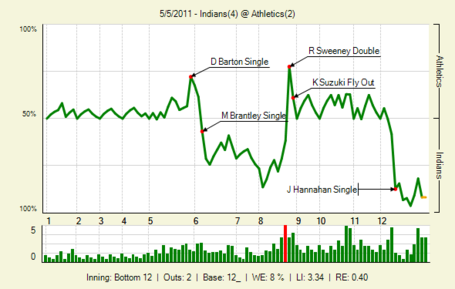