Travis Cahill and the Oakland bullpen ended the Indians' seven game winning streak. Cahill allowed one run over seven innings, scattering eight base runners. The Indians had few scoring opportunities; their best one of the night came in the third inning, when they scored their lone run of the night but ended the frame with runners on first and third.

Josh Tomlin's franchise-record streak of starts of more than five innings to start a career continued. Tomlin allowed three runs in 7.2 innings of work, striking out five, and walking none. Both of his earned runs were David DeJesus home runs (his first career multi-homer game). After DeJesus hit his second home run in the fourth inning, Tomlin retired 14 straight batters. Jack Hannahan's rare error would lead to an Oakland insurance run in the bottom of the eighth. Tomlin is seeming to get better as he faces more major-league batters. Whatever adjustments the league is making against him has been more than off-set by his adjustments. Tonight he used mostly his four-seamer along with his cut fastball to get through the outing; according to Brooks, 56 of those 71 fastballs were for strikes. 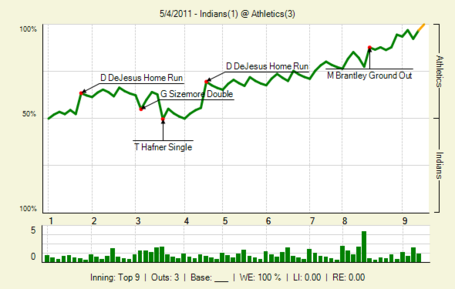