This was as complete a loss as the Indians have had this season. A pitcher who hadn't won in 28 starts threw a complete game, Fausto Carmona was taken apart by the Toronto offense, and there was a bone-headed defensive play to add to the misery.

Toronto manager John Farrell, who was the head of Cleveland's minor-league system as Carmona was working his way to the majors, had his hitters jump on the first fastball in the strike zone, and that strategy really paid off in the fourth inning. Carmona would give up seven runs and five hits in the inning, and wasn't helped at all by the defense behind him. With the score 4-1 and the bases loaded, Corey Patterson hit what could have been a double play ball to Orlando Cabrera, but Cabrera first couldn't field the grounder, then bobbled the ball in his attempt to get an out and first. Cabrera made things even worse by ignoring the runner at third trying to score while he stared at the ball in his glove, his back to home plate. Toronto would score two on that error, and three more in the inning. 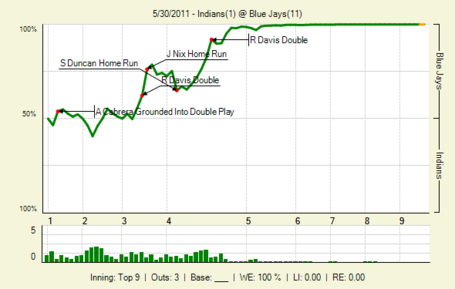