This is the first week this season in which the Indians were thoroughly outplayed by their opponents. Both Boston and Tampa Bay shut down the Tribe offense; you could chalk that up to superior pitching, or be worried that the league has found a way to approach some key hitters.

Jeremy Hellickson faced the Indians for the first time, but obviously knew their scouting report well. He threw more changeups (25)  for strikes today than fastballs (24). He got ahead with changeups, and even threw them when he got behind in the count. He pitched backwards, often using his fastball as a show pitch; less than half of his four-seamers were either in the strike zone or swung at.

Justin Masterson, usually good for at least seven innings and three runs or less, couldn't find the strike zone, walking five and giving up 8 hits in just five innings. He allowed just his third home run of the season to boot. His previous worst 2011 outing came against the Rays earlier in the month, so it's a good thing the Indians are through with the Rays for the regular season. 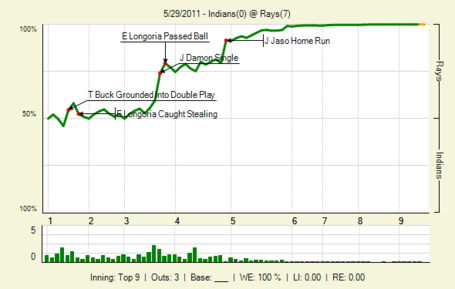