There was some awful base running by both teams, and the game ended, appropriately enough, with the Rays running themselves out of the ninth inning.

The Indians started the game with four straight hits off Tampa starter James Shields, but only came away with two runs. Asdrubal Cabrera drove home Michael Brantley with a stand-up triple, but was later picked off by Shields in a timing play. Shin-Soo Choo, who was at the plate, then singled and would later score on a Carlos Santana sacrifice fly, but just after Choo stepped on home plate, the Rays doubled off Travis Buck, who either greatly misread the flight of the ball or didn't remember how many outs there were.

Matt LaPorta, who had looked as bad as a major-league hitter can look the previous night, homered the other way off Shields in his first at-bat. LaPorta can do things with his bat that not many other hitters can do, but those brief flashes of brilliance have been overshadowed by weak swings and bad at-bats. Even so, he's still an above-average hitter in this more pitching-friendly era of baseball. .248/.325/.440, a line that would have sent LaPorta to the minors a decade ago, is good for a 116 OPS+.

Those runs not scored in the first inning loomed large, as the Indians would be stuck on three runs for a while. Shields settled down in the middle innings, facing the minimum in the fifth, sixth, and seventh innings. Meanwhile, the Rays chipped away at the lead by tallying single runs in the third and fourth innings. Their run in the fourth came on a squeeze play that Tribe starter Carlos Carrasco couldn't make a play on. Carrasco, to his credit, got out of the inning without allowing further damage.

The game remained 3-2 going into the top of the eighth. Michael Brantley led off with a nice line-drive opposite-field single. Then Asrubal Cabrera hit what looked like a double play ball, but Ben Zobrist let the ball go right through his legs, and the Indians now had runners on first and third with nobody out. Rays reliever J.P. Howell then hit Shin-Soo Choo in the back, loading the bases. Manny Acta pinch-hit for Travis Buck, and hit what should have been a bases-clearing double off the top of the left field wall, but for some reason Shin-Soo Choo stayed at first base while the ball was in the air, and was almost passed on the base path by Duncan. But Orlando Cabrera would drive Choo (as well as Duncan) home with a two-out single off Rays closer(!) Kyle Farnsworth.

The Rays would make some noise in the ninth, and Chris Perez was summoned to get the final out. With the bases loaded, Johnny Damon hit a grounder that Matt LaPorta bobbled, and reached first before LaPorta. But two Rays were at third base, and after a lengthy rundown, Sean Rodriguez was tagged out by Carlos Santana. So the game ended on a Tribe error. 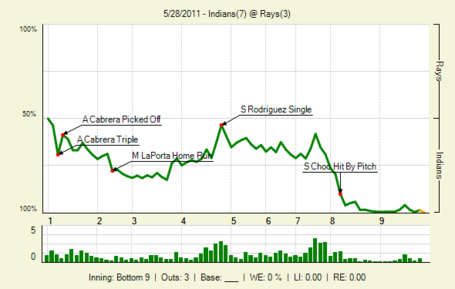