In his two starts after dominating the Indians on May 11, David Price struggled, giving up five runs to the Yankees and Marlins. So seeing the Indians again was a nice tonic for whatever ills he suffered. Price struck out a career-high 12 hitters in seven shutout innings. He again featured his 94-96 mph fastball, though working in more off-speed pitches than in his last start against the Indians. I guess it says something about how good his fastball is that the Indians couldn't touch it even though they've seen roughly 170 of them over the past two weeks.

Josh Tomlin gave up two two-run homers in the second inning, ensuring that he would not post a quality start for the first time all season. He would extend his string of consecutive starts of at least five innings to begin a career, and did not give up any more runs, but the damage had already been done.

Grady Sizemore was back in the lineup, but will DH most of the time this road trip because of the field surfaces. He looked off at the plate, probably a little because of the pitcher and little because of his time off. Manny Acta juggled the rest of the lineup as well, dropping Carlos Santana to seventh in the batting order, giving Shin-Soo Choo a night off against the tough left-hander, and moving Asdrubal Cabrera to third in the order. None of it made a difference against Price, the fourth of five straight elite pitchers the Indians are facing.

Even though the Indians have lost three straight, their lead hasn't changed a lot. The Tigers lost again, so the Cleveland lead is still 6 games. 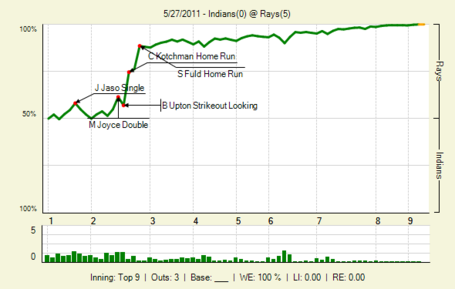