The Browns managed a late safety to get on the scoreboard, but...oh, we're talking about a baseball game?

MItch Talbot may have been healthy, but he certainly wasn't effective. He gave up 7 runs in the first inning, and was kind enough to soak up a couple more innings before leaving. Hitters are the ultimate judge of a pitcher's effectiveness, and judging why Boston's lineup did against Talbot, he was as ineffective as you can get. They reached base 14 times (12 hits, 2 walks) in three innings, BUT (if you must look for a silver lining) only two of those hits were for extra bases. Talbot's going to get more starts only because the Indians can't option him to the minors, though with the team doing so well, another start or two of this ilk could mean a move to the bullpen.

The Indians trailed 8-0 after Talbot left, and while 99 times out of 100 a team won't come back from that kind of deficit, teams have made those types of comebacks before. After Frank Herrmann left, the game was over. Herrmann pitched just as badly as Talbot, a rare confluence of separate but similar suckiness in one game.  He gave up just 6 hits, but he made those hits count; three were homers, and the other three were mere doubles.

In the midst of all this carnage, Boston starter Jon Lester had an easy go of it, getting six easy innings in before calling it a day. He led 14-0 when he left. The Indians avoided a shutout by scoring twice in the eighth inning. 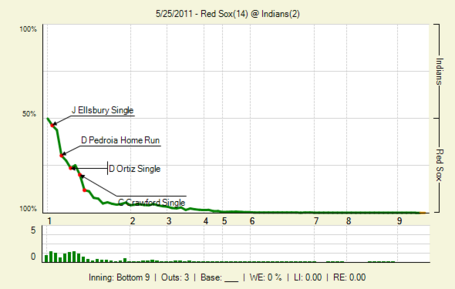