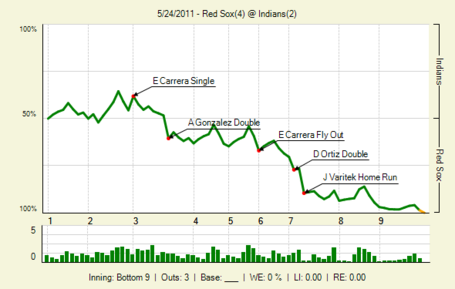 
Jason Varitek had a very good game; the aging Boston catcher not only hit a two-run homer, his first of the season, but actually threw out a couple of runners. The Indians were trying to run every chance they got because of Varitek's poor arm, but tonight at least the percentages didn't reflect reality.

Wildness hurt Fausto Carmona and the Indians in the third inning, as a hit batter and a walk both came around to score. Carmona would give up four runs, but he pitched into the ninth, and at times looked very good. But Josh Beckett and the bullpen were better.

Ezequiel Carrera drove in the first run of the evening with a non-bunt single in the third, and Travis Buck took Jonathan Papelbon deep in the ninth. Between those two runs, the Indians couldn't capitalize on the few scoring chances they had.