The Indians flouted the odds, scoring two runs off Daniel Bard with two outs, and retiring Carl Crawford on a game-ending double play. You can't rely on types of things to go right, but it was because of Justin Masterson's fantastic pitched that the Indians were even in a position to beat the odds.

The Indians will face Boston's top three starters this series, and started by matching up against Clay Buchholz. The tall right-hander took more time to throw the baseball than Rafael Betancourt, which could have been his way of keeping hitters off-balance. It was more likely his mid-90s four-seam fastball that gave Tribe hitters fits. A lot of pitchers have been throwing the Indians less fastballs, but Buchholz almost exclusively threw either the four-seam fastball or the two-seam cutter.

Asdrubal Cabrera got the Indians on the board when he slammed his third homer in two days in the fourth inning. Cabrera has been on fire over the last two weeks, perfect timing for a lineup that's missing both Grady Sizemore and Travis Hafner. And, as we'll see later in the game, he's not just pulling the ball as a left-handed hitter.

Boston took a 2-1 lead when Carl Crawford took Masterson deep in the fifth inning. The Indians might have tied the game in the bottom of the inning, but Jack Hannahan was called out after he overslid second base in a steal attempt. Austin Kearns, who was at the plate at the time, then doubled, which would have score Hannahan easily from second, and probably even from first. But recently those types of missed opportunities don't come back to haunt this team.

In the bottom of the sixth, a fairly heavy rain began which last through the rest of the game. At one point, the tarp began to be rolled out, only to be stopped by the crew chief. At that time, Boston led 2-1 and the game was official, so if that tarp had been allowed to be placed on the field, there's a chance the Indians lose in a rain-shortened game.

Another caught stealing was equally important. After Jacoby Ellsbury reached first base on a questionable call by the first base umpire (leading to a rare Manny Acta ejection), the Boston center fielder attempted to steal second but was gunned down by Lou Marson. If Ellsbury reaches second safely, he would have scored later in the inning on Adrian Gonzalez's single.

Jack Hannahan led off the eighth with a single. Adam Everett pinch-ran for him, and went to second on a groundout. That was it for Buchholz; Terry Francona brought in Daniel Bard, one of the better setup men in the league. He struck out pinch-hitter Carlos Santana on high fastballs, but that didn't work with Michael Brantley, who made Bard come down in the strike zone. He took a couple borderline pitches for balls, then jumped on a fastball down in the zone, hitting it between first and second to plate the tying run. Then up came Asdrubal, who hit a fastball down and way over Carl Crawford's head to score Brantley.

Chris Perez lived on the edge yet again in his save attempt. He gave up (thanks to Choo's reputation) a single to J.D. Drew with one out. Drew went to third on a similar single by Jed Lowrie. Carl Crawford was now up, and the Indians configured their middle infielders at double play depth on the remote chance that Crawford hit a hard ground ball at an infielder. Crawford did just that, and the Indians doubled him up to end the game. 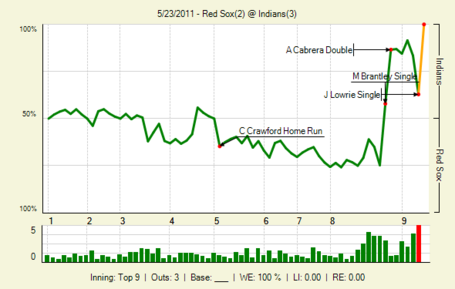