In the 2006 draft, the Indians didn't have a pick in the first round, but had five picks between the  first sandwich round, the 2nd round, and the second sandwich round. Of those five picks, two have made the majors: David Huff (with Cleveland) and Josh Rodriguez (with Pittsburgh), both of whom could still turn into major-league players. The other three (Wes Hodges, Steven Wright, and Matt McBride) are still in the organization, but are not thought of as prospects.

However, two players from that draft have already become key major-league contributors, and they were drafted in consecutive rounds. And each played a key role in today's 2-1 victory.

Josh Tomlin, who was selected in the 19th round (581st overall) of the 2006 draft, was brilliant in seven innings of work. The Reds are one of the best offensive clubs in the National League, and hit just a couple pitches hard all game. Their lone run of the day came on a hit batsmen, a very good piece of hitting by Jay Bruce, and a grounder that should have resulted in a double play. It's fun watching Tomlin pitch. He's an aggressive pitcher even though his stuff is below-average, he almost never steps off the rubber, controls the running game, and always seems in control of the game. These characteristics were developed because he had to have them to make it to the majors.

After Cincinnati broke the scoreless tie, the Indians finally got a leadoff hitter on base when Asdrubal Cabrera singled off Homer Bailey. Bailey had been equally brilliant, matching Tomlin's line almost exactly. Neither pitcher had racked up many strikeouts, but were making pitches that could only be put in play weakly. Bailey came to the majors a fireballer, but has ratcheted back his velocity a tick and is now able to throw those fastballs into great spots. But unfortunately for him, he missed his spot to Travis Buck with two outs in the inning, and Buck launched his first home in a year to give the Indians a 2-1 lead.

As the eighth began, Manny Acta elected to pull Tomlin from game. With a pitcher like Tomlin, pitch counts are never going to be much of an issue, but times through the order will be. The bottom of the order was due up, so Acta could have tried to get with sending out Tomlin for another inning, but with the bullpen in good shape, he chose to bring in Vinnie Pestano.

Pestano was the Indians' 20th round pick in 2006. He was always a reliever, but moved at a rate of a level a year. His fastball isn't overpowering from a velocity standpoint, but the batter reacts to it as if it was a 97 or 98 mph heater. He hides the ball very well, which is reminiscent of LGFT Rafael Betancourt, Going into the game today, he had struck out 18 in 16.1 innings, a ratio well-suited for a setup man. He needed those strikeouts after Ryan Hanigan opened the eighth with a wormburner that Asdrubal Cabrera couldn't get to in time. With shadows and unfamiliarity adding even more deception to his pitches, he struck out Edgar Renteria on a high fastball, caught Drew Stubbs looking, and, after making Jonny Gomes look silly with his slider, froze him with fastball that looked right down the middle.

Chris Perez's fastball was much less accurate. He walked Joey Votto on four straight pitches, got Brandon Phillips to hit into a double play, got wild again and walked Drew Stubbs, but finished the game by striking out Scott Rolen. 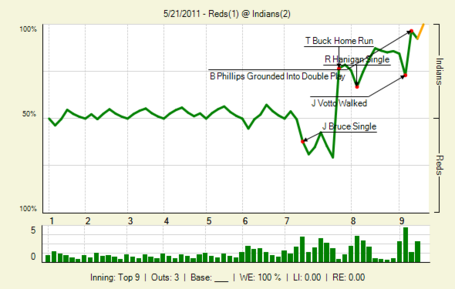