The home magic continued, as the Indians won yet another game in their last at-bat.

Friday night started a difficult stretch for a couple reasons. First, the schedule is not kind, as the Indians will face off against two division leaders  plus Boston and Cincinnati over the next two weeks. And they'll likely play most of those teams without Grady Sizemore or Travis Hafner, both of whom are now on the Disabled List. Sizemore may be back in a week or so, but Travis Hafner is likely out for at least a month, as that "right side pain" turned out to be an oblique strain, a difficult injury for a hitter to come back from quickly.

Three innings into tonight's game, another Tribe player went down. After throwing a breaking pitch to Ryan Hanigan, starter Alex White walked off the mound in obvious discomfort, and the Cleveland trainers rushed to his side. The injury wasn't to his elbow or shoulder, but to his middle finger. He stayed in the game, throwing almost exclusively fastballs, and should have got out of the inning unscathed, but Matt LaPorta air-mailed his throw to second, allowing two runs to score. That throw should have started an inning-ending double play, but White had to pitch to two more batters. He didn't allow any more runs to score, but didn't come back after the inning. White will have an MRI on the finger on Saturday to determine if there's any structural damage; as we've seen with Adam Miller, a finger injury can be just as serious as any other throwing arm injury.

Frank Herrmann replaced White, and pitched a scoreless fourth and fifth innings, but got into trouble in the sixth. He gave up singles to LGFT Brandon Phillips and Jay Bruce to open the inning. Then another potential double play was flubbed when Orlando Cabrera couldn't field a hard grounder. Phillips scored from third, and Bruce would later score on a Chris Heisey single. The Reds now led 4-0, and the Indians didn't have a hit yet.

Travis Wood had allowed only a Carlos Santana walk to this point, so those extra two runs were a big blow. But things were to change quickly. Paul Janish made an outstanding play to deny Matt LaPorta's bid to break up the no-hitter, but Austin Kearns would end the drama with a solid single next. That seemed to unravel Wood, who allowed the next four batters to reach, including a bases-loaded walk to force in the third run of the inning. Shelley Duncan drove in the tying run next with a sacrifice fly, and just like that, the game was in play.

The Indians would commit yet another error in the eighth, turning what should have been a relatively uneventful inning into something much more tense. Scott Rolen, who was at first with two outs, got a huge jump off Vinnie Pestano. Carlos Santana should have put the ball in his pocket, but he threw it instead, his throw went into the outfield, and Rolen was now at third with two outs. Thankfully, Pestano got Ryan Hanigan to hit a weak liner to end the inning.

After the first two Indians were retired in the eighth. Shin-Soo Choo hit a high drive to left-center that scraped the wall and bounded back towards the infield. Choo easily reached third and turned back at the last possible second from an inside-the-park home run attempt. Reds manager Dusty Baker walked Carlos Santana, and brought in right-hander Nick Masset to face Shelley Duncan. Duncan has struggled of late now that he's facing more right-handed pitching, and Manny Acta pulled him for a left-handed hitter. Since Travis Buck still couldn't play, the only leftie on the bench was recent call-up Ezequiel Carrera, and even though that pinch-hit appearance would be Carrera's major-league debut, Acta went with him, but not before telling the speedy outfielder to lay down a bunt. The gamble worked out perfectly, as first baseman Joey Votto was playing deep; Carrera laid down a nice drag bunt, and Votto's tag missed Carrera. The Indians took the lead, and were on their way to another dramatic home win.

In the ninth, Chris Perez walked pinch-hitter  Fred Lewis, but that turned out to be for the best. Lewis made two base running blunders; first, on a deep fly out, he failed to tag up and go to second, and finally, he broke for second on a weak liner back to the pitcher. With that double play, the Indians drew first blood in the 2011 Battle of Ohio. 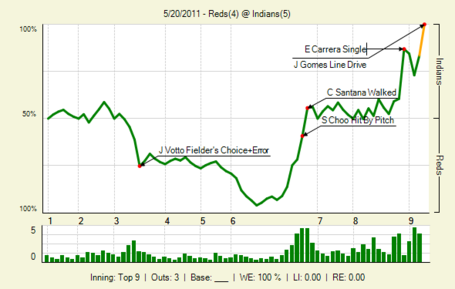