It was difficult to see the action on the field thanks to a fog at US Cellular Field, but the White Sox could see Fausto Carmona's offerings just fine. They jumped on Carmona for the second time this season, this time scoring eight runs on 7 hits and 2 walks in five innings. Most of the damage was done in the first couple innings; Carmona allowed two runs in the first, and four in the second, so by the time the Indians came up to at-bat in the third, they faced a five run deficit.

The lineup that Manny Acta sent out tonight was depleted, with three starters out for various reasons. Travis Hafner sat out again with a side injury, and will be re-evaluated in Cleveland before the Cincinnati series. Travis Buck was held out with a turf toe injury, and Orlando Cabrera was not injured, but was in South Carolina to officially become a United Stated citizen. So the Indians almost had to empty their bench to field a lineup, and had to call up Luis Valbuena (designating Justin Germano in the process) in case there were any injuries.

The Indians had a good opportunity to get back into the game in the fifth after two singles to lead off the inning, but Adam Everett struck out and Michael Brantley hit into a double play. Everett also struck out in the seventh with runners on second and third

Austin Kearns took advantage of the starting opportunity by going 2-for-4, including a double. When Grady Sizemore comes back, the Indians will have to chose to send down Travis Buck or designate Kearns for assignment. 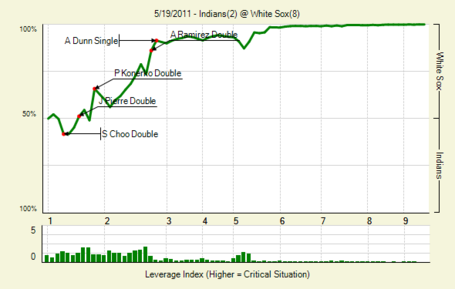