Jake Peavy has pitched in parts of three season with Chicago, but he's been hurt for much of that time. Tonight he showed a rare glimpse of what he was capable of. He was helped by a very high strike zone, but his pitches would have been just as unhittable had he had to spot it lower in the strike zone. No Indian reached third base, and only three reached first base.

Justin Masterson just about matched results with Peavy, but his path to a very good start was more scenic. The White Sox scored a run just three batters into the bottom of the first inning, and he was in trouble in the second, fifth, and sixth innings. Then it seemed that his mechanics locked into place, and he cruised through the remainder of the game. Justin went eight innings (a complete game), striking out eight and walking two.

Travis Hafner, who has been on a tear of late, was a late scratch. The injury was described as "right side soreness", and though it doesn't seem serious, Hafner's inability to stay in the lineup in recent years makes any mild ouchie a point of concern. With Choo not hitting well, Hafner has been supplying much of the middle-of-the-order power in the lineup, his absence from the offense would be a massive obstacle for the rest of the lineup to overcome. 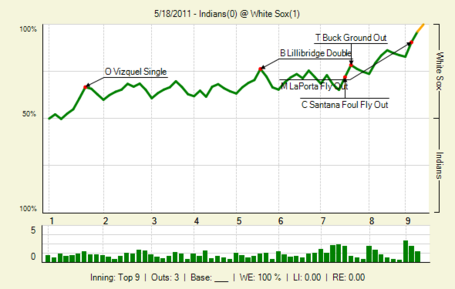