The Indians still had more runs in them even after scoring 19 the previous night. Travis Hafner cleared the bases in the first inning, giving the Indians a 3-0 lead. And they kept up the pressure, scoring another run in the fourth, and two more in the fifth. All starting nine at least got on base, and eight of the nine reach via a base hit. After facing a string of the AL's best pitchers, the Indians feasted on Kansas City's staff, scoring 26 runs in their short two-game series.

Carlos Carrasco had fantastic stuff, but had problems staying in the strike zone. He struck out five, and was never really in trouble, but he still had to throw a bunch of pitches just to get through five innings. His threw several four-seam fastballs at 95 or even 96 mph, but according to Brooks, only 53.33% of them were for strikes. It's nice to see that his stuff if back to being as good as it was last season, but he now has to hit the corners. Tomlin and Carrasco made for an interesting contrasts in this series; the one has below-average stuff yet breezed through innings, while the one with above-average stuff struggled to qualify for the win.

With the win, the Indians pushed their lead over Detroit to five games. 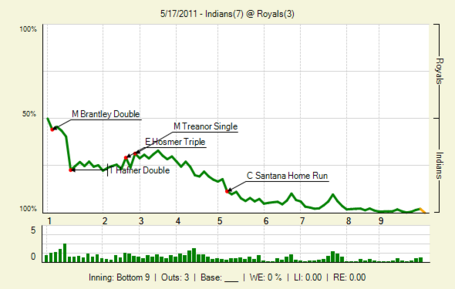