This one could have simply been explained by the Kyle Davies start, but things were actually more interesting than that.

For those who don't know, Kyle Davies is probably the worst regular starting pitcher in the big leagues. Despite having a fastball that reaches 95 mph and 139 starts under his belt, Davies has a career 78 ERA+. Last season, in one of the best seasons for pitching in a long time, he posted a 5.34 ERA over 32 starts (good for a 78 ERA+). He made 22 starts in 2009 with similar results. To my estimation, the only reason why the Royals continue to trot him out was that he has "good stuff" and that they don't have anyone better in the minors (though that seems hard to believe).

But a funny thing happened on the way to the expected blowout. No, the blowout still happened, but most of the damage didn't come off of Davies. He left the game with a shoulder injury after pitching to four batters; his velocity was well off, and he had given up a line shot to first and three walks. Kansas City manager brought in Nick Adcock, and he almost got out of the jam; he struck out Travis Hafner on three pitches. and got ahead of Orlando Cabrera, but Cabrera blooped a single in front of Jeff Francouer to plate the first two runs of the game.

Adcock would pitch into the third before being replaced by...tomorrow's starter. The Royals had been rained out the day before, so Vin Mazzaro would be pitching on normal rest. The idea was to have Mazzaro go six innings so that the Royals bullpen wouldn't be burned out at the beginning of a long stretch of games without an off-day, with the club calling up a starter for tomorrow's game using the roster spot freed up by Davies going on the DL. It seemed like a logical plan, and if Mazzaro had a good outing, the Royals could even have had a chance to come back to win the game.

But after a quiet third inning, things took an historic turn. In the fourth and fifth innings, Mazzaro gave up 14 runs. 9 of those runs came with two outs in the fourth inning; the Indians batted around with two outs, with only one walk in that stretch. There was a Travis Hafner double (three runs), a Granpabrera single (one run), a Travis Buck single, a Matt LaPorta double (two runs), a Jack Hannahan single, and a Michael Brantley three-run homer.

Incredibly enough, Mazzaro came out to pitch the fifth. After all, he was in the rotation, so theoretically he could have gone a couple of innings more. He got Shin-Soo Choo to fly out, then allowed the next four batters to reach before Ned Yost mercifully pulled him. His final line: 2.1 innings, 11 hits, 14 earned runs, 2 strikeouts, 2 walks. Joe Posnanski notes that no reliever had given up that many runs in the game since World War II. And all 14 of those runs were earned, which is probably an all-time record for a reliever. So those of you watching the game were watching history.

Meanwhile Josh Tomlin did his usual thing. He went six innings, and could have gone at least an inning more, but what was the point by the time? He allowed one run on five hits, walking nobody and striking out one. I'd guess that the Royals weren't as locked in at the plate as the game went on, but then again, pitchers often have trouble with pitching with that big a lead. Tomlin was supposed to start Sunday's game, and had even warmed up for it before the game was called. But he didn't show any adverse effects; he looked like he always did. He shut down a decent lineup, one that he's faced quite a bit in his short major-league career.

Before the game, Grady Sizemore was placed on the 15-day Disabled List, and Travis Buck was recalled to take his place. Assuming that the diagnosis is still a bone bruise, I think it's a prudent move; there's no sense in rushing Sizemore back to the lineup at this point, and I think the Indians wanted to bring back Buck and to prevent Shelley Duncan from making any more starts in the outfield. Buck went 3-for-6 in the blowout, and should be playing over Austin Kearns, who is likely a week or two from a DFA. 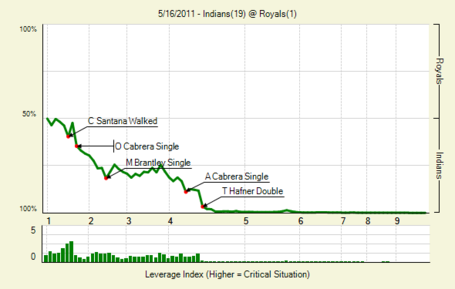