Even with recent history keeping hope alive in the back of the mind, the Indians were playing bad baseball in the late innings, and the way they were swinging the bat against starting pitcher Doug Fister, it looked as though they would go quickly and meekly in the ninth, disappointing one of the biggest non-Opening Day crowds since 2007. But hope came in the form of Brandon League, who had blown several saves in the past week, and in a left fielder the Indians were seeing for the first time. Pronk did the rest.

The Indians hit two early home runs off Fister, but after that the tall Seattle right-hander shut the offense down, not allowing a hit for the rest of his evening. Fister would go eight innings, striking out 6 and allowing one walk and four hits. Fausto Carmona's outing went on an opposite track; he didn't allow a hit until there were two outs in the fifth, when Carlos Peguero hit his first major-league home run. Still, Carmona seemed in control of the game until he came out for the seventh. Fausto was certainly not tired, as his pitch count was only in the 70s, but he lost command of his pitches. He gave up a leadoff single to Chone Figgins, then left a pitch in the middle of the plate to Justin Smoak, Seattle's best hitter. Smoak hammered the pitch over the wall in center, and the game suddenly flipped in favor of the Mariners. Carmona would allow another run to score on a Michael Saunders sacrifice fly.

Meanwhile, the offense couldn't manage anything against Fister, managing only a walk between the seventh and eighth innings. They went into the bottom of the ninth down two. Michael Brantley opened with a catchable line drive towards left field, but Carlos Peguero took a route too shallow and let the ball get over his head for a leadoff double. Asdrubal Cabrera was next, and he also went the other way on a League fastball, and once again Peguero misplayed the ball, misjudging how far it was hit. Brantley scored, and Cabrera now represented the tying run with nobody out. Both balls were not routine, but they were catches that a left fielder needs to make.

So after going into the ninth inning down two runs, the Indians were two well-placed outs from tying the game. Shin-Soo Choo moved Cabrera over to third with a weakly-hit grounder to the first baseman. Carlos Santana was next, but he hit the ball right to the drawn-in second baseman, and Cabrera was forced to stay at third. Now the odds swung back in favor of League and the Mariners. Travis Hafner stepped to the plate, not having homered in almost a month. You know the rest. 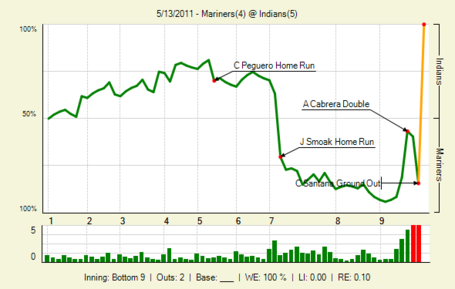