The Rays may have lost several key players, but as long as David Price and James Shields are in the rotation, they're contenders. Shields used his "power changeup" to stifle the Indians bats, allowing one earned run in seven innings. Justin Masterson had his worst start of the year, allowing five runs in 5.2 innings on 8 hits and 4 walks. He reverted to early last year's form, falling behind batters all game long. I'm going to guess that between starts he and pitching coach Tim Belcher are going to compare and contrast this start's mechanics with his other starts this season.

The Indians were picked off twice on the bases; Michael Brantley was caught leaning off of first base in the third inning, and Orlando Cabrera (see picture above) was caught wandering off of second to end the sixth. They still made the game semi-interesting, scoring four late runs, but by then the margin was too much for a moderate rally to overcome. 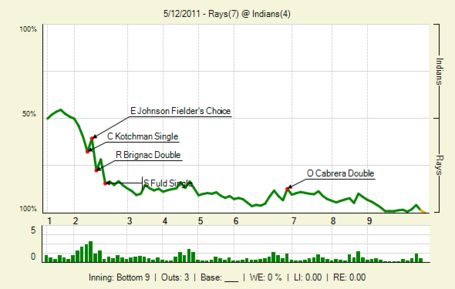