The home winning streak ended with a thud.

The way David Price was pitching, it would have taken Carlos Carrasco's best effort to keep the Indians in the game. But Carrasco was making his first start since going on the Disabled List, and he was rusty. His changeup was extremely effective (92% were for strikes), but he couldn't spot either of his fastballs in the strike zone, and that got him in trouble.  He got out of a first inning jam of his own making, but gave up a run in the second on a Sam Fuld double down the right-field line. He limited the damage in the second by retiring Ben Zobrist with runners on second and third, but couldn't stop the fourth from becoming a big inning. BJ Upton opened with a bunt single, then went to third on Casey "20-20" Kotchman's single. After Reid Brignac popped up his bunt attempt, Carrasco might have got out of it, but Matt LaPorta hesitated after fielding a sharp grounder, getting neither a double play nor the runner at the plate. A single and a sacrifice fly made the score 4-0, a difficult margin to make up given who was pitching for Tampa.

David Price had no trouble spotting his fastball. The Indians have recently been seeing off-speed pitches in hitter's counts, but Price used essentially his four-seam fastball to stifle the Tribe bats. Price's fastball sat in the upper-90s all night, and the Indians didn't really touch until the late innings. Carlos Santana ended the perfect game with a opposite-field double to lead off the fifth; he was the only base runner in the first six innings.

Carrasco was done after five innings, and Justin Germano came in to pitch. Germano, Cleveland's long man, hadn't pitched much this season, which is the sign of a good pitching staff. He got three innings in, was unimpressive, and gave way to Chad Durbin, who pitched the ninth. I guess the only good thing about being blown out was that the five relievers the Indians count on got a day off.

Good news did come after the game, though. The MRI on Grady Sizemore's right knee showed no structural damage. He's just day to day. 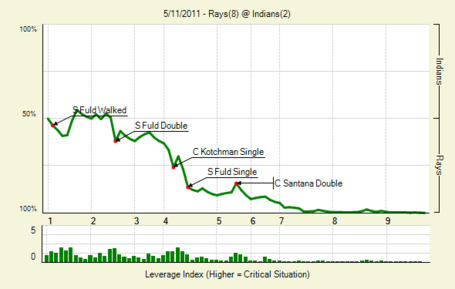