All the classic hallmarks of a frustrating loss were there: walks leading to runs, stranding a small village on second and third base, not putting the game away when opportunity presented itself. This, however, has not been a typical Indians season, so somehow the Indians, through no particular impetus of their own, walked away with a frustrating victory.

With Jeff Niemann on the Disabled List with a back injury, the Rays brought LGFNEO Andy Sonnanstine in from the bullpen to make his first start of the season. Sonnanstine has been Tampa's Justin Germano, making only six appearances despite spending the entire season on the 25-man roster. So you'd think that this would be a rare opportunity to blow a team out. And after the first couple of batters, it looked like the Indians would do just that. Grady Sizemore jumped on a hanger and somehow kept the ball fair for a leadoff home run. Asdrubal Cabrera followed with a line drive single up the middle, and then Shin-Soo Choo lined another high breaking pitch to the opposite field. But Carlos Santana grounded into a 3-6-1 double play, Sonnanstine got his pitches down, and the Rays stayed in the game.

Josh Tomlin was his usual self, fearlessly throwing strikes with his rather pedestrian stuff. He gave up another solo home run in the fourth, but the Indians gave him back the lead after Michael Brantley responded with a home run of his own in the bottom of the inning. Tomlin would give up a run in the sixth, and after giving up a leadoff double in the seventh, was quickly pulled. He had thrown only 93 pitches, and he wasn't visibly laboring, but with Tony Sipp ready and a left-hander coming to the plate, Acta made the move. Sipp retired Dan Johnson, but pinch-hitter and LGFT Kelly Shoppach drove the runner home with a single.

The Indians had taken the lead the previous inning with an unconventional rally. Michael Brantley singled with one out, stole second base, and the next two batters walked. Grady Sizemore then hit a line drive back to pitcher Juan Cruz, who knocked the ball down and got the force out at home. Asdrubal Cabrera bailed the team out with a two-out infield hit. The Indians scored a second run when Shoppach John Jaso allowed a pitch to get by him.

So after the top of the seventh, the Indians held a 4-3 lead. They had golden opportunities in the seventh and eighth to put Tampa Bay away. In the bottom of the seventh, Michael Brantley hit into a double play with runners on first and third. After Evan Longoria tied the game with a home run in the top of the eighth, the Indians got a runner to third with one out in the bottom of the inning but failed to get him home. These missed opportunities almost always, in baseball's cosmic reckonings, lead to a late loss. But not tonight.

The bottom of the ninth start just like those other incomplete rallies. Choo opened with a walk, and made it to third despite hesitating after Carlos Santana hit a single through the hole. This prompted Maddon to walk Hafner to load the bases, bring in an extra infielder, and bringing in Kyle Farnsworth(!) to get the Rays out of the mess. It almost worked. Orlando Cabrera hit a high-hopping grounder that was fielded by Reid Brignac (playing in the hole that's usually between shortstop and third base); he threw home for the force. Farnsworth then got ahead of Michael Brantley 0-2 with Adam Everett on deck, but then couldn't find the strike zone. After almost hitting Brantley on the 2-2 pitch, he bounced the payoff offering in front of the plate to end the game. It was a ugly, ugly, win. But it was a win nonetheless. 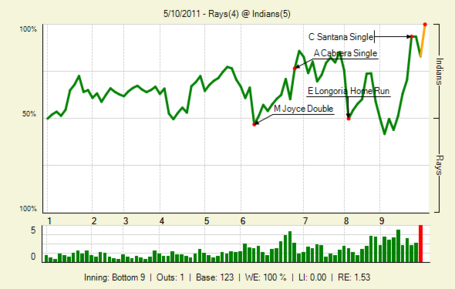