The Indians finished off a series sweep of the Tigers the same way they won the first two games: with outstanding relief pitching and late-inning heroics. It's not a method of winning that you want to rely on, but it's encouraging that the team is winning the nail-biters in addition to the more conventional contests.

Detroit scored two runs off Justin Masterson in the first inning; Masterson looked really shaky at this point, throwing a lot of pitches to get through the first inning, and facing an even bigger jam in the second. But after Justin got out of the second inning with a 5-4-3 double play with the bases loaded, he settled down, pitching into the eighth inning.

Like the other two contests, the Indians and Tigers were tied for most of the game. The Indians would tie the contest in the second on Matt LaPorta's opposite-field double. The double was an impressive piece of hitting; LaPorta "flicked" the ball to the right field wall with just his arms. Hits like that give you hope that LaPorta still has room for development.

Manny Acta stuck with Masterson longer than he usually would have because the bullpen had been used so much in the weekend's first two games. He started the eighth inning having thrown over 110 pitches, and when he allowed the first two to reach, Acta pulled him. Rafael Perez, who had thrown two innings last night, was summoned to quell the rally, but allowed the Tigers to take the lead on a sacrifice fly.

The Tigers' bullpen had also been used extensively in the series, but both the eighth and ninth inning pitchers had at least one days' rest. That eighth inning pitcher, though, was Joaquin Benoit, who had given up the grand slam to Carlos Santana on Friday night. Benoit would retire Santana this time, but all the other batters in the inning either reached or drove in a run. Choo reached on a sharp single, went to second when Shelley Duncan was hit by a pitch, and scored on Orlando Cabrera's single in a nifty piece of base running. Brandon Inge got a piece of Cabrera's hard grounder, but the ball trickled into the outfield as Choo rounded third. The ball reach home plate just about when Choo did, but he kicked out Alex Avila's leg with his feet-first slide to get access to the plate. Shelley Duncan flopped onto home plate for an important insurance run after Michael Brantley served a single over the shortstop.

Chris Perez was called on to pitch in his third straight game, and wasn't as effective as he'd been on Friday or Saturday. He allowed two runners to reach, which allowed Miguel Cabrera to come to the plate representing the go-ahead run. He singled, driving in a run, but I think the Indians were fine with that result. Perez retired Brennan Boesch to complete the sweep.

When the week started, the Tigers were 1.5 games behind the Indians. The week ended with the Indians ahead of Detroit 7.5 games, a six-game swing. The Tigers will have five months to make up those six games, including a lot of head-to-head matchups later in the summer, but even so, that's a huge standings change regardless of when it occurred. The other putative AL Central contenders, Minnesota and Chicago, are now 10 games back. 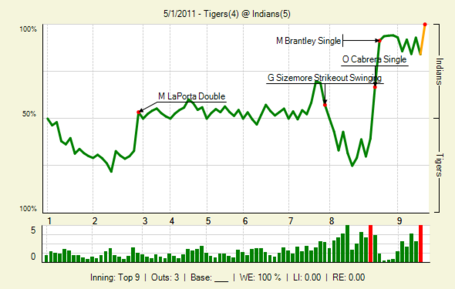