Lost in the euphoria of winning these games are a couple impressive accomplishments. The Indians won two games started by two of Detroit's top three starters while sending to the mound a shaky Jeanmar Gomez and a pitcher, though very talented, making his MLB debut.

Alex White made his debut in fine style, going six innings and giving up two runs.The 2009 first round pick made it to Cleveland just over a year after making his professional debut, but wasn't really rushed; though the Indians recalled him to take the place of Carlos Carrasco, White was ready for the majors. He relied on his four-seam fastball tonight (60 of his 100 pitches), but he also made nice use of a fast sharp-breaking slider. Manny Acta helped him through his first inning by ordering White to intentionally walk Miguel Cabrera with a base open. When White next faced Cabrera, the first baseman took him deep.

Opposing White was Rick Porcello, who would have been White's teammate at North Carolina had the Tigers not ponied up the huge bonus to lure him away from college. Porcello at 22 is already a polished pitcher, and the Indians didn't do much against him, relying on two solo home runs for their scoring. But because White held the Tigers to two runs (also solo shots), the Indians were in the game when the burdens were shifted to the bullpens.

What followed from the eight on was a battle royal between the two bullpens. The Indians used five relievers, all going at least one inning, and the Tigers used three relievers, including a dominant three inning performance from Al Alburquerque. The two bullpens between them struck out 18 with just 2 unintentional walks. Had the game continued past the 13th, the Indians would likely have brought in Chad Durbin, who was only one of two pitchers left in the bullpen.

But Detroit's bullpen blinked before that ominous event could occur. Michael Brantley singled to open the inning. With Asdrubal Cabrera likely to bunt, Brayan Villareal attempted to throw to first to pick off Brantley. But his throw was wild, and Cabrera, instead of bunting Brantley into scoring position, was able to move him over to third with one out. That necessitated two intentional walks to load the bases, and brought up Orlando Cabrera. Cabrera jumped on the first pitch, hitting a fly ball to medium-deep right-center. The ball would have normally been caught, but since the outfielders were drawn in, the ball fell harmlessly for a game-winning single.

The Indians can tie the Progressive/Jacobs Field record for consecutive home victories with a win on Sunday. And this time the Indians have the favorable pitching matchup. 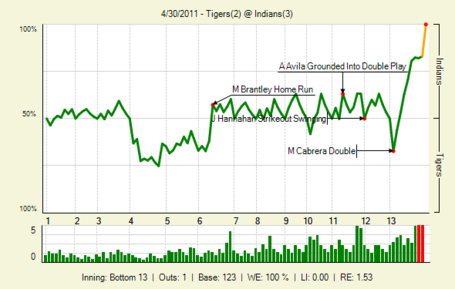