Laffey's Indians career began with Cliff Lee's demotion in 2007, and it's ended four years later with the Mariners sending the Indians a player acquired for Cliff Lee.

When the Indians demoted Cliff in 2007, they brought up 22-year-old Laffey to take his place in the rotation. He would make nine starts, giving up 25 earned runs in 49.1 innings (4.56 ERA), certainly acceptable in place of what Lee had done. He would pitch 4.2 scoreless innings in the ALCS. It appeared that the next logical step was a spot towards the bottom of next year's rotation.

For the most part, that's what happened. Laffey was recalled at the end of April when Jake Westbrook went on the DL, and started off great, allowing only three earned runs in May (averaging almost 7 innings a start). He'd give up 8 runs to Texas (6-2-2008), then would reel off another four nice starts, but after that, he would struggle. After giving up 8 runs in 4.0 innings to the Angels in late August, he'd be optioned down to Buffalo. He wouldn't be brought back to Cleveland in September because of elbow inflammation.

But Laffey would be back with the Indians in 2009, losing a rotation battle to Scott Lewis but taking over for him after Lewis got hurt in his first start. He was one of the few decent starters in April, but because the bullpen was so bad, the Indians moved him there at the end of the month. He notched a three inning save on May 6th against the Red Sox, his first regular-season relief appearance.  He would pitch well out of the bullpen, but had to go on the DL after straining an oblique in late May. He'd return after seven weeks on the DL, and by this time Laffey was needed more in the rotation. Aaron would pitch very well August, but ended the season badly (opposing batters hit .387/.446/.555 in his six September starts.

Laffey was in the bullpen again to start the 2010 season, and he remained there for two months, but was demoted in late May, brought back as a starter in late June, and was then placed on the DL in mid-July because of elbow inflammation. Laffey, who had thrown fast, was throwing his fastball noticeably slower, as you can see in the FanGraphs velocity chart: 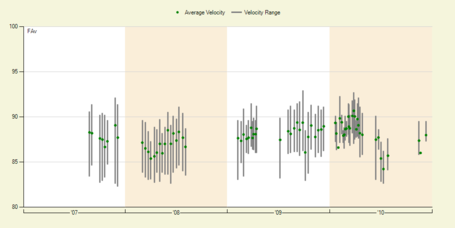 Laffey would return in September, but by this time the Indians were no longer thinking of him as a starter. And so we come to today's deal.

I still don't think Laffey was handled right, especially when he was sent to the bullpen in early 2009 not because he was pitching poorly, but because the relievers weren't getting the job done. But perhaps Laffey wouldn't be durable enough to stand up to a 30-start season, and that's probably what the Indians were thinking as well. They didn't have to make a decision on him this season, as he still had an option year left, but he was going to well down on the depth chart, and it seemed inevitable that he'd be leaving one way or the other. If he would have survived the Durbin signing, there would have been another roster addition that would have done the trick.

Matt Lawson is a fringe prospect who has mainly played second base, which is a curious acquisition for a organization that has a mess of them in the high minors. The Indians could move him to the outfield, where they don't have as much depth, and with Grady Sizemore likely starting the season on the DL, he could start the season as a starter in Columbus. Lawson hit .293/.372/.439 last season between Frisco (TEX) and West Tennessee (SEA). He was a minor part of the deal that sent Cliff Lee from Seattle to Texas in the middle of last season, and was left off Seattle's roster even through he was eligible for the Rule 5 Draft. John Sickels didn't list Lawson as one of Seattle's top 20 prospects.