Pretty much everybody knows that Manny Acta is all up in your Twitterverse with an awesomely strange avatar that features his grandchild not watching him on television. The brave Mannyger looks down at the infant, loving but strong, silently approving the youngest Acta's hand devouring technique. Avatar aside, Acta's Twitter is filled with all kinds of wonderful things, including his popular and incredibly non-innovative "Song Of The Day" feature. In this regular Tweet-segment, Acta takes the name of a childhood friend and combines it with the name of one of his favorite Edgar Allen Poe characters. The most popular of these Tweets has been "Julio of the Perverse."

No, not really, dunderhead. He picks a song he likes and lets us all know, "This is the song of the day, friends." By doing so, he gives us each a chance to sit in front of our computers, pupils constricting from the video display, and listen to one of Acta's anthems through the tinny speakers that came standard. I do this daily, a ritual that makes me feel "just a little more Manny" (part of an ongoing initiative of increased Manny-ness that I've undertaken). Acta also selects a song of the day in Spanish.

What I've done here is compiled all of Manny's English language song picks, up through March 29, 2011. I listed each with the year of release, peak on the US Billboard Hot 100, and length. If you'd like a better look at this chart, click on it. 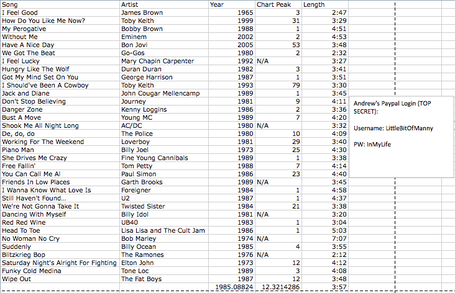 Some things I noticed:

Using the averages calculated above, I can find the ultimate Manny Acta jam. Manny loves music from around 1985 and his fave tracks peak, on average, at #12. An easy choice, then, would be Phil Collins' and Phillip Bailey's "Easy Lover", the #12 song for all of 1985. However, "Easy Lover" is 4:50, meaning it would be the third longest song on the list, the second if we eliminate "No Woman, No Cry." I can't say for sure, but Acta's attention might waver during "Easy Lover" (although mine does not—that is my jam).

I can refine my view of time to get a better sense of what Manny likes—Acta's sweet spot is 1985.088, or approximately January 29, 1985. Looking at the songs that hit number 12 around that period, "Boys of Summer" by Don Henley as well as "Method of Modern Love" by Hall and Oates both emerge as candidates. However, both clock long. Looking around, two obvious candidates come from the week of February 9. First, there's David Lee Roth's "California Girls", which is actually a little short for Acta (only 2:50), although it did chart at #13 that week, right where Manny likes 'em. Let's be real, though, Acta's taste in music might be sort of lame, but I refuse to believe that a guy who looks this cool actually likes David Lee Roth's Yankovic-like Beach Boys cover.

That brings us to the ultimate Manny Acta jam: "The Heat Is On" by Glenn Frey. Featured on the soundtrack for the film "Beverly Hills Cop", the song is 3:44 in length, only thirteen seconds shorter than Acta's ideal song length. On top of this, the song charted at #11 the week of February 9, 1985, within shouting distance of Manny's favorite era in the history of music: 1985.088. Candidly, I can't imagine this working out much better. This song is very Manny Acta—I wager we'll eventually see it featured on Acta's Twitter, especially given Manny's selection of Kenny Loggins' soundtrack hit, "Danger Zone", two weeks ago. That's solid evidence that the Indians manager isn't limiting himself to songs that appeared on albums.