The final score went up on the board in the top of the 5th inning when the Twins plated 5 runs against David Huff. Tribe batters appeared poised to chase Twins starter Brian Duensing early but, after giving up four runs over the first two frames, Duensing settled in and worked out of trouble the rest of the afternoon, finally giving way to the Minnesota bullpen after 7.1 innings.

Huff is continuing to tread water a million miles offshore with no boats in sight. He's going to remain in the same place for the short term but it won't be long before he is either devoured by a shark or sucked into the wake of a Carnival cruise ship. Since returning from Columbus, Huff's made two starts, throwing 9.2 innings. In those limited innings, he's given up 13 hits, 8 earned runs, 4 walks, 3 homeruns and has blanaced this with 3 strikeouts. In short, Huff doesn't do anything that indicates he's a major league starter-he's been an extreme flyball pitcher with no ability to generate strikeouts all season for Cleveland. On top of this, he generated an organizational headache with the twitter controversey. This cloud that follows David Huff on the internet is odd-he's become something of a CleCom lightning rod and he seems to have a very devoted internet fanclub that thinks he's been sorely mistreated by the Indians. To wit:

Let me get this straight. David pitches great for four innings, has a horrible 5th inning where his pitches went wonky AND the defense (I'm looking at you Marte), went kaput but yet the entire loss falls solely on HUFF's shoulders? Let's also talk about how Justin Masterson lost us almost TWENTY games STRAIGHT (putting together last year and the beginning of this season combined) and yet NOTHING was ever written by the Indians media or those wannabe journalistic hacks at the Plain Dealer. Justin's treated as some amazing pitcher who NEVER loses games because he ever had bad innings - no, the blame NEVER seems to go on Justin's shoulders and yet David, who had a 6-0 record in Columbus this season, gets the shift it seems almost every start - no matter what he does! No worries David - my family and I support you and are huge fans. I hope the Tribe is stupid enough to release you to a team who would REALLY support you and one where you can flourish!

That's from the comment section of the mlb.com recap and there's nothing to really add except that it's very strange. How could anyone watch David Huff and think he was some untapped resource? I have to imagine the front office will explore ways to get Huff out of Cleveland going forward, whether that's through a DFA or a garbage in/garbage out trade. On the other hand, they can continue to treat Huff as organizational fodder with no real reprecussions. His value to the Indians is quickly approaching Sowersian levels, meaning he can be a AAA swingman if he's lucky.

There was good news today, as Matt LaPorta went yard for the second time in three games, hitting a three-run bomb to left in his first AB. He also added two more his later in the game. With his walk-off last night and the homerun today, he now has 7 in his 128 ABs since returning from the Clippers. Rate that out to around 520 ABs, or about a whole season, and you get around 30 homeruns. LaPorta appears to be shaping up to be a serious power threat that the Indians can pencil into the middle of the lineup. He doesn't look like a finished product, especially against tough breaking pitches, but he does seem to know the strike zone and, as has always been the word on him, there's thunder in his bat. When he makes solid contact, the ball moves, quickly.

Also making some waves is Justin Germano, the pitcher that the Indians signed out of the Japanese leagues as an NRI this spring. Since his call-up, German has gone 7 scoreless innings, striking out 7 and surrendering only 3 hits and two walks agains the potent Boston, Toronton and Minnesota offenses. Germano was decent down below as well, however, he wasn't this good. Hard to know what to make of him except that he's entered his name into the 2011 bullpen discussion until further notice. Elsewhere in bullpen news, Chris Perez and Rafael Perez both pitched effectively, especially nice to see out of Pure Rage after his hiccup last night.

A loss today but this team has become very watchable and there's a lot to dream on. 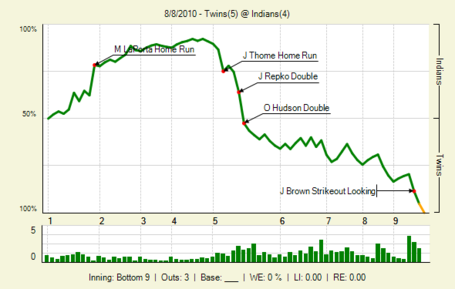