The Indians had many missed opportunities in last night's game, but they got away with it. Tonight they missed more opportunities, and this time the Twins made them pay.

Fausto Carmona and LGFT Carl Pavano matched pitching lines through most of the game. Pavano, who has been Minnesota's best pitcher, allowed two runs in the fourth inning, but help the Indians in check after that. The Indians had golden opportunities to tie or take the lead in the sixth and seventh innings, but couldn't get runners home. In the sixth, Matt LaPorta came to the plate with runners on second and third and one out and grounded out to the third baseman; the runners couldn't advance. In the seventh, Asdrubal came up in the same situation and also grounded out, this time to the first baseman.

After Pavano struck out Shelley Duncan to end the seventh, the Twins broke it open. Carmona came out for the eighth, in retrospect an ill-advised moved. He served up Trevor Plouffe's first major-league home run, then a double off the bat of Joe Mauer. He would get Delmon Young to fly out, and then was taken out. Tony Sipp came in to face Jason Kubel, but walked the left-hander, then gave up two straight hits, scoring three more runs. By the time the Twins were done in the seventh, the game was out of reach. In this series, the template that had been working since the All-Star Break (keep it close until the later innings) hasn't been working, as the bullpen has given up eight runs in the first two games of this series. 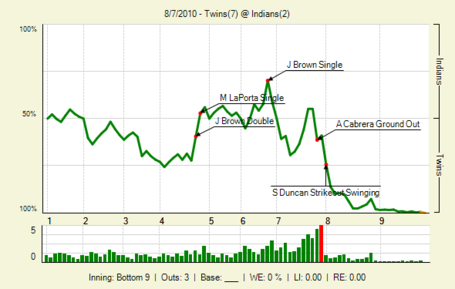