Still. the Indians should have won this game in a laugher.

Francisco Liriano, who had up to this point owned the Indians in 2010, lived on the outside corner through the early innings, and the Indians were ready for it. Michael Brantley and Asdrubal Cabrera led off the first with singles hit up the middle, and after Shin-Soo Choo grounded out, Shelley Duncan, normally a dead-pull hitter, went the other way on a outside pitch and drove in both runners with a double down the right field line. The Indians would tack on another run before Jason Donald struck out with runners at the corners. That strikeout was the first of several opportunities for the Indians to really put the game out of reach. Instead, the margin never quite got large enough.

The best opportunity to put the game away early came in the second; the Indians had put another run on the board, and had runners at the corners with nobody out. Liriano had created the mess by walking the first two batters of the inning, but he struck out Choo, Duncan, and LaPorta to keep the score 4-0. Had the Indians gotten that big hit, perhaps Liriano lasts only long enough to warm up a pitcher. Instead, he would pitch into the fifth before being removed, having walked six and given up seven hits but only four runs.

Jeanmar Gomez, the benefactor of these early runs, worked hard to put up zeros. The pinpoint control of his first start wasn't there, but he kept getting out of jams. He might have gotten through six, but Jayson Nix couldn't get rid of the ball quick enough on a potential double play ball, and Joe Mauer took out Jason Donald before the second baseman could make the turn. It's been painfully obvious over the past 10 days that Nix is a second baseman not accustomed to playing third; he's not going to embarrass you there if he plays there occasionally, but he's not a candidate to start. If, as Manny Acta said in his pre-game radio interview, one of the things holding the Indians back is defense, then why not play the guy on the roster who came up as a third baseman and has the necessary skills to play the position well? This is not Andy Marte versus Jared Goedert yet, or even Marte versus Lonnie Chisenhall; this is Andy Marte versus two second basemen trying to play third.

The Indians added insurance runs in the sixth and ninth, and normally that would have been enough for the bullpen to work with. But not tonight, for the Twins would score five runs in the last three innings off relievers that have been reliable. Manny Acta tried to push Justin Germano into the seventh, and it might have worked had Nix not booted a grounder with one out. That put a second runner on base, and Acta brought in Rafael Perez to get Denard Span and Alexi Casilla. Perez got Span, but Casilla hit a two-run double to bring the Twins to within striking distance.

In the eighth, Joe Smith, who stayed in to pitch to Jason Kubel because he was hitting between right-handed hitter, gave up a solo home run to the left-hander. Smith struck out Michael Cuddyer, and Andy Marte (who had been inserted as a defensive replacement) made a nice play to nab Danny Valencia for the third out. If Gomez can go an extra inning, maybe Acta could have played matchup in the eighth.

That left the ninth, and Chris Perez came in with a two-run lead thanks to that second insurance run. In true Twins fashion, JJ Hardy started things off with a perfectly-placed swinging bunt, setting the stage for Gardenhire to pinch-hit LGFT Jim Thome, who entered the at-bat 23 home runs short of becoming only the fifth Untainted™ member of the 600-HR Club. Thome probably hit his 578th home run just over the left field wall, but the blast was ruled as having hit off the top of the wall, and the replay was inconclusive. Gardenhire argued the replay, and was ejected, but didn't leave the field for several minutes, thus defeating one of the intended purposes of replays (speeding up play). The hubbub was moot, at least as far as the score was concerned, for Alexi Casilla lined one just over the glove of Perez to plate both runners, and the game was tied.

Then LaPorta led off the inning, and  - WOO..erm, sorry - he launched a home run into the left-field bleachers, giving the Indians their first walk-off homer of the season, and yet another contender a crucial defeat. 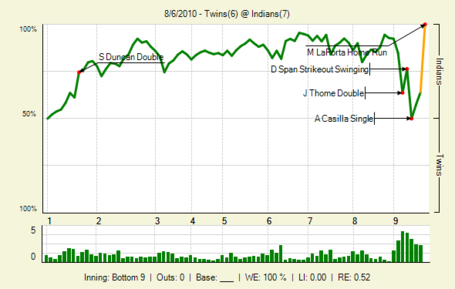