Josh Tomlin is now three starts into his major league career. All three starts have been good, but, he's not a pitcher I'm prepared to embrace without reservations. Tomlin's pitched 19.1 major league innings and in that time he's struck out 13, walked 4 and, here's the part that bugs me, recorded 34 flyball outs versus only 17 groundball outs. This ratio, of 0.5 GB:FB, is really bad-it's the worst among guys who've appeared for the Indians as starters (yes, worse than Huff), it'd be the worst among all qualifying AL starters if he qualified and it's not all that different than the admittedly more tenable 0.76 he put up in Columbus. I don't think his major league stats thus far mean much except that they reflect what we'd already learned at Columbus: he lives in the air, a place that few, if any, pitchers with his mediocre stuff can survive.

Tomlin appears to do some things really well: he spots his fastball on the corners and low in the zone, his breaking ball appears surprising serviceable and everyone involved with Cleveland is falling all over themselves praising his makeup. I don't want to bury the guy and as long as he's performing, great. He's faced three superior offensive teams and handled each with aplomb-maybe we're watching the birth of the next Kevin Slowey: an effective flyball pitcher.

Tonight, Tomlin pitched brilliantly early on, retiring the first ten Red Sox he faced. He ran into a heap of trouble in the fourth when he gave up a single to Scutaro and, after retiring David Ortiz to get the second out of the inning, walked Victor Martinez and J.D. Drew. This brought Adrian Beltre, who's doing wonders for the "contract year" argument for the second time in his career, to the plate. Tomlin left a fastball down the middle and Beltre obliged him, delivering a grand slam. This erased Cleveland's 1-0 lead, which had been earned on a Shin-Soo Choo tater to center, and gave Boston's starter, Daisuke Matsuzaka, all he would need to win the game.

Dice-K, perhaps the only player in the league who's nickname exists exclusively as a phonetic explanation of his real name (what else could it be? Matsuzaka hasn't been a true strikeout artist since his first year in America), cruised tonight, using his 4-seam fastball 62% of the time and dialing it up to 95 mph on a handful of occasions. The Indians hitters looked generally clueless against him and he gave Tito Francona, still wearing those Ben Franklin glasses and his favorite red warm-up top, eight strong innings. After the Red Sox stretched their lead to 6-1 by beating up on Frank Hermann, who the league seems to have figured out to some degree, Francona tried to steal the last three outs of the game by using the husk of what used to be shut-down reliever Hideki Okajima. Okajima had plans of his own and gave up a run and left two on before handing the game to Jonathan Papelbon. Papelbon had two outs to record and, after exposing Andy Marte's bat speed as less than adequate, he made things interesting by walking Shelley Duncan to load the bases, allowing Trevor Crowe to come to the plate and represent, at least metaphorically, the tying run. Things were briefly tense, at least for those not "in the Crowe know", before Crowe did what Crowe does (well, besides take terrible routes in the outfield) and struck out.

Apparently, Michael Brantley will be joining the Indians tomorrow and manning centerfield and the leadoff spot for most of the remaining schedule. This is not a moment too soon, as Crowe has again shown exactly what he can bring to the table for Cleveland: not a great deal. He has been terrible in many ways but his 475 OPS against lefthanders deserves special mention. I have no idea if Brantley is prepared to be in the majors either but he's responded well to his demotion and his 817 OPS in Columbus is already significantly better than Crowe's 761 in the same environs, as an older, assumedly more sagacious, man.

In ephemera, two things ought to be remembered. The first is that, just hours after I was boldly proclaiming that he could never play the outfield, let alone move around the grocery store without a Rascal, Jordan Brown played left field in Fenway with no incident. He wasn't required to make any plays but, still, Acta is willing to trot him out there. The other footnote to attach to this game is that Acta, with 3B coach Steve Smith suspended for telling Tito Francona his favorite red warm-up top looked like a mumu, coached 3B himself. He didn't do a whole lot but he looked cool as hell out there.

So, the Indians finish their road trip at 4-3 and are now 12-9 since the break, having faced all contending clubs. They'll welcome the Twins, Orioles and M's (GRUDGE MATCH OF THE FAILED SABERMETRICIANS!) before heading back out on the road. 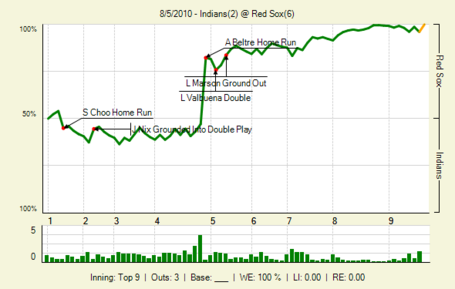 And now, if you aren't devoted to Tom Hamilton to the extent that it will upset you, a little Tom Hamilton analysis:

The Good Tom Hamilton: In the bottom of the 8th inning, after watching David Ortiz, upon taking a called strike, enter into his customary elliptical orbit away from and then back towards homeplate, expressing his disgust with the call through slow-motion locomotion, Hamilton remarked that the home plate umpire must not have received the memo from MLB offices that detailed how any pitch that a Boston Red Sox hitter takes is automatically a ball. Go get 'em, Tom.

The Bad Tom Hamilton: In the top of the 8th inning, Hamilton made no effort to hide his admiration for the Red Sox starting staff, gushing that they had "5 legitimate aces", hitting each syllable in "legitimate" hard with his radio voice, letting us know that this statement was no snow job. In between expressing his excitement for the upcoming Fenway ritual of belting out Neil Diamond's "Sweet Caroline" (seriously), the five pitchers Hamilton was trying to induct into the hall of fame are:

Boston's five starting pitchers are very good. Two of them have, in fact, performed like legitimate aces and of the five, it's not a bad bet that some pair of them will perform like legitimate aces next year as well. However, the staff has been beset by injuries (like many old media guys, Hamilton never seems to have grasped that health is a skill), Lackey appears to be in a straight up decline phase, and Matsuzaka and Beckett have never been quite as good as their most vocal fans would like you to believe.

None of this is to disparage these guys or the staff as a whole-it's one of the best in the AL. It's just to express a little frustration about how Hamilton allows himself to get sucked into the mythos of the Red Sox and the Yankees and ends up saying things that are not only plainly wrong, they're hyperbolic to an extent that there's a level of willful ignorance at play. Some admiration for well-constructed non-Cleveland clubs is appropriate but Hamilton's fawning is not only tiresome, it's also often false.

The Absurd Tom Hamilton: In cautioning about getting too optimistic about Carlos Santana's upcoming knee surgery, Hamilton said, "If the good Lord had made our knees to be better with surgery, then every time a baby was born it would be having knee surgery right away, and I'm not seeing many infants having knee surgeries."

The best I can make of this is that Hamilton is imagining a world in which the Almighty wants us all to have our knees modified in a specific way and so, instead of just modifying our bodies using divine powers (I know, I know), S/He communicates to the leading, earth-bound, medical authorities that infants ought to have their knees operated on at birth.

Whatever, Hamilton. At least you're not Rosenhaus.