The Indians already landed a mortal blow onto Detroit's playoff hopes, and it looks like they're doing the same to Boston's AL East designs. Despite throwing out an essentially AAA lineup, they forced Jon Lester out in the sixth inning, limiting Lester to his shortest outing since his first few starts of the season.

Lester retired the Indians in order in the first two innings, but the Indians took the lead when, with runners on first and second, Lou Marson laid down a bunt, trying to move the runners, and Lester threw wildly to third, allowing the runner on third to score. The Indians might have broken open the game then and there, since the play ended with runners on second and third with nobody out, but wouldn't be able to do any more damage.

The Indians added two more runs runs in the fifth, the first on a sacrifice fly, the second on an opposite-field double off the bat of Shelley Duncan. Lester, who was approaching 100 pitches by now and was showing signs of muscle cramps in his legs, came out to the mound in the sixth, and stayed in even after manager Terry Francona made another visit to the mound concerned with his pitcher's health. Jayson Nix hit Lester's next pitch over the Green Monster to give the Indians a 4-0 lead. Andy Marte would end Lester's night with a single.

After the Red Sox scored their first and only run of the night on a David Ortiz homer in the bottom of the sixth, the Indians put the game on ice with a five-run seventh thanks entirely to two Boston errors. Jason Donald led off the inning with a single up the middle, and then first baseman Victor Martinez let Asdrubal Cabrera's ground down the first base line go under his glove for a two-base error. Shin-Soo Choo was walked to load the bases; the strategy should have worked, for Duncan grounded right to the drawn-in Marco Scutaro, but the shortstop pulled Kevin Cash off home plate, and the runner was safe. The Red Sox had a second chance to record an out at home when Matt LaPorta grounded again to shortstop, and this time they pulled it off. But the Indians would take advantage of the extra outs; Jayson Nix drove home Choo with a sacrifice fly, and then Andy Marte put the exclamation point on the inning with a three-run homer that just cleared the top of the Monster wall, bouncing into one of the light towers atop the 37-foot wall.

Justin Masterson lasted just five innings, walking four and striking out 3, but kept the ball for the most part down in the strike zone and got the game into the hands of the Cleveland bullpen. Tony Sipp and Joe Smith finished out the key bottom of the sixth, the score still 4-1, and after the Indians exploded in the seventh, all that remained was to mop up. 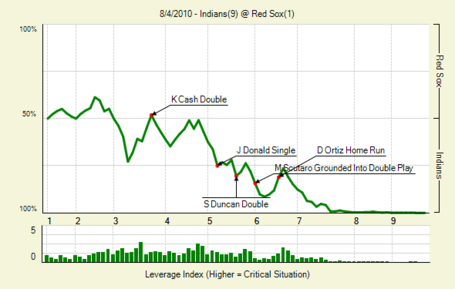