So what happened to that guy who was spotting his pitches in the strike zone? The guy who was always ahead in the count? I haven't seen him since June, and in his place is a guy who falls behind in the count, either nibbling beyond the edges of the plate or just not able to hit the corners. I want the real Mitch Talbot back, for the guy pitching in his place sucks.

Evil Talbot was rocked in the first two innings against the White Sox, giving up seven hits and five runs. Almost all of those seven hits were smacked right on the screws, an indication of how accommodating the location of those pitches were. If not for an ill-advised steal attempt by Juan Pierre, the Indians wouldn't have had an opportunity to get back into the game. The starting pitcher stayed in the game for three more innings, not giving up any further damage despite allowing another five base runners. The White Sox loaded the bases in the fourth with one out, but AJ Pierzynski hit into a double play.

Mark Buerhle wasn't on the top of his game, and the Indians were able to cut into the lead early. Jayson Nix hit a two-run homer against his former team in the fourth, and Travis Hafner doubled in another run in the fifth. Justin Germano gave up his first earned run in the sixth on a Alexis Rios home run in the sixth, and there the scored stayed until the ninth inning. Jayson Nix, who was irked early in the game by a couple bad strike calls, was tossed after striking out looking in the seventh inning. His body language wasn't demonstrative, so either he said a magic word or (more likely) umpire Bill Welke got tired of hearing him.

Bobby Jenks was called upon to quell an uprising in the eighth, which he did, but the ninth was a different story. He walked Shin-Soo Choo to start the inning, then gave up a Shelley Duncan bloop single. Choo scored on the hit, and the next five Indian hitters represented either the tying or winning runs. Travis Hafner was next, and he doubled down the left field line, pushing Duncan to third with still nobody out. Luis Valbuena then hit a Minnesota chop, and Brent Lillabridge threw wildly to first, allowing both Duncan and Hafner to score and Valbuena to go to second. The Indians should have then ended the game then and there, but Andy Marte, who had had a pretty good game at the plate, rolled over on a Jenks pitch, pulling it to shortstop. Valbuena stayed at second, and therefore wasn't able to go home on Jason Donald's high chopper to third.

After Chris Perez had an adventurous tenth inning, the Indians went in order in the bottom of the inning. Rafael Perez came out for the eleventh, and after retiring to the first two White Sox, he left a fastball out over the plate to Lillabridge, and the utility infielder just cleared the left field wall, giving Chicago the lead. Perez imploded after that, giving up three more runs before being pulled. 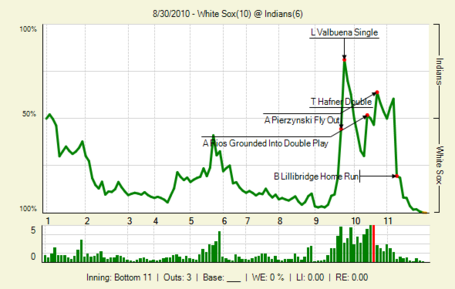