The Indians placed Travis Hafner and Carlos Santana on the Disabled List before the game, further weakening an already punchless lineup. Of the nine starters tonight, seven spent at least some time with the Clippers this season. Shelley Duncan served as the cleanup hitter, with Jordan Brown protecting him. Trevor Crowe was the leadoff hitter, Luis Valbuena the seventh hitter, with Jayson Nix and Lou Marson rounding out the lineup. Not surprisingly, this lineup managed three hits against Josh Beckett and Jonathan Papelbon. Normally this would make for a rather dull baseball game, especially when Boston trotted out their own B squad thanks to injuries and the like, but there was a bench-clearing fracas to liven things up.

The whole thing started when Josh Beckett nailed first Shelley Duncan, who had collected four hits the previous evening, then Shin-Soo Choo, who had singled in the first inning. Both pitches were fastballs, not breaking balls gone astray, and Beckett was anything but wild this evening, striking out eight and walking none. I'm very confident that both pitches were thrown and located intentionally. Why Beckett would bother trying to intimidate this particular lineup is beyond me, though after he hit Choo in the third, not a single Indian would reach base the rest of the evening.

Indians starter David Huff didn't attempt to retaliate, giving up three runs on two home runs in 5.1 innings. Huff went to the minors to work on his command, but he didn't seem a different pitcher. Against a decimated Boston lineup, he allowed 9 base runners, including two walks, and struck out two. He'll be getting more starts because the Indians don't have a lot of other options, but he's not going to last very long in the rotation however weak the starting depth is if he continues to pitch like this.

Justin Germano, pitching in his second game with the Indians, was the first Cleveland pitcher to punch back, throwing behind David Ortiz in the seventh. Nothing came of that, but when Jensen Lewis threw behind Adrian Beltre in the eighth, there was no longer mistaking the intent. Beltre started to walk towards the mound, and both benches cleared. Heated words were exchanged, including between Boston manager Terry Francona and Indians third base coach Steve Smith, and Josh Beckett, safely restrained by his teammates, told the Indians exactly what he thought of them. If Beckett had pulled that stunt under National League rules, he would have been nailed in his first at-bat after hitting Choo in the knee, but in the American League, the battles must be fought by proxy. Pedro Martinez reveled in having his teammates fight the battles he instigated, and Beckett has memorized his playbook.

Come to think of it, it's too bad his teammates restrained him. 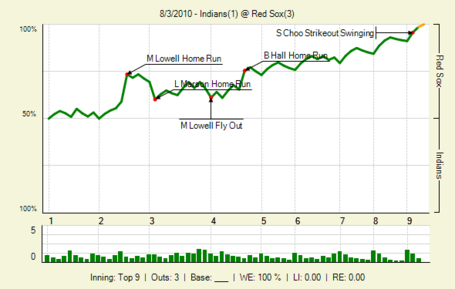