The major story of the game came in the seventh inning, when Carlos Santana injured his left leg in a play at the plate. Red Sox outfielder Ryan Kalish was attempting to score from second on a single to right field, and Shin-Soo Choo made an outstanding throw to the plate. Santana caught the ball a moment before Kalish reached the plate, so he wasn't able to turn towards the runner, and Kalish slid into Santana's leg, bending it backwards. I watched the play live, and didn't think too much of the collision until seeing it in slow-motion, then felt as if I'd been punched in the stomach. If you missed the replay, and you have a strong stomach, you can view it here. Santana remained on the ground for several minutes, and he left the field on a cart with his leg in an air cast. We really won't know the extent of Santana's injury until an MRI is performed tomorrow, though initial tests performed on his knee were promising.  Hopefully the injury isn't as bad as it looked.

The injury overshadowed another nice win. Since the break, the Indians have played all 18 of their game against teams that were .500 or above when they played them, and they've managed an 11-7 record, quite an accomplishment considering that during that stretch four players have been traded, two pitchers (Laffey and Talbot) placed on the Disabled List, and a position player (Hafner) likely headed there. Tonight, Fausto Carmona followed up his worst start of the season with one of better outings. He faced a Red Sox lineup that wasn't at full strength, but still a very dangerous team in an unpredictable stadium. He finished seven innings, giving up one unearned run on eight hits and a walk, striking out 5 along the way.

The Indians offense had a good game as well, shelling John Lackey for 6 runs on 9 hits. They could have had at least a couple more, but they had a runner cut down at home in the fourth, and Shin-Soo Choo grounded into a double play with runners at the corners in the fifth, scoring a run but also short-circuiting the rally. Shelley Duncan had a nice game, collecting four singles and playing good defense in left field.

In this day of opposites, it was appropriate that the recently trustworthy bullpen almost let the lead slip away. Rafael Perez got the first runner in the eighth, but then allowed consecutive base hits by Jed Lowrie (batting in the spot normally occupied by Kevin Youkillis, who had left earlier with a thumb injury) and David Ortiz. Frank Herrmann came in and got Victor Martinez to pop out, but he hung a slider to Adrian Beltre, and just like that it was a one-run game, and Chris Perez would be needed to pitch. Pure Rage allowed a base runner, but got Lowrie to fly out on a 3-2 pitch to end the game; had Lowrie reached, he would have had to face David Ortiz. 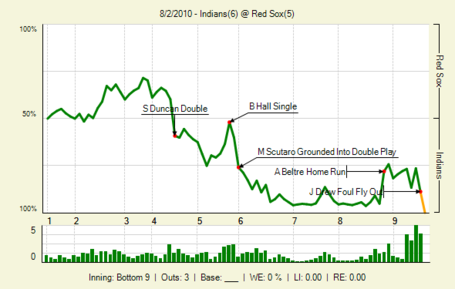